Send us your pugs (photos)! Its Friday!! And since we can't all go on a post-work fun ride/happy hour (Friday tradition), we decided to celebrate in the next best way. Unfortunately there are only so many pugs in bike baskets snorting around the interweb (although there is a surprising amount). So please, I'm relying on all of you to join in the celebration and stuff your pug (or any pug) into your bike basket and send it along! Otherwise, I might have to start resorting to other pooches and in a few months I'll be onto hamsters...and no one wants that.
Posted by Julia at 4:00 PM 0 comments 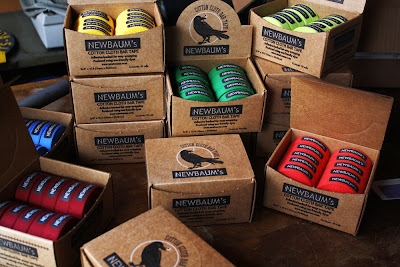 Hot on the (w)heels of yestersday's post, we have yet another awesome product in our store, I've been hearing great things about this bar tape!

"This tape is made in the USA of highly durable milled cotton cloth.
We use eco-friendly dyes for a lower impact on the environment.
We think you'll love the tactile feel of cotton over any synthetic tape on the market, plus maybe you'll feel better, because you are using a product made with renewable natural resources.
- Adhesive back for easy wrapping
- 14 colors
- 10 ft x 3/4" rolls" 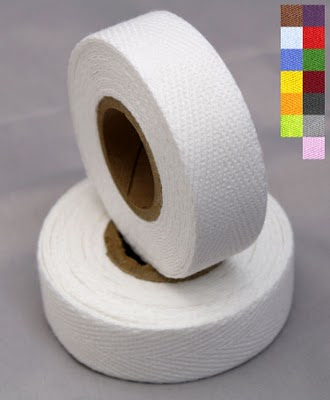 Just added these to the Soma online store.... 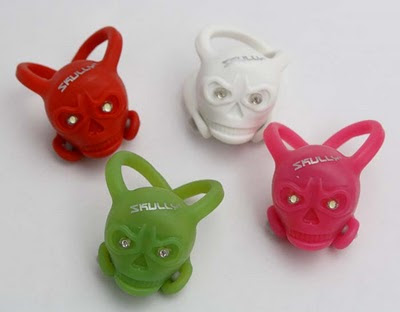 Skully lights in green, white, red, and hot pink. Pick either red or white LEDs. Get 1 and stick on your basket, get 10 and light up your spokes. Anyway you wrap it, it's time we graduated from frogs... 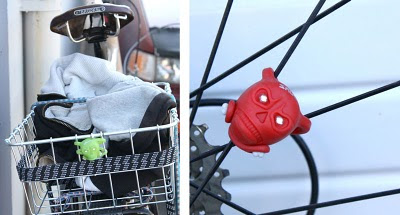 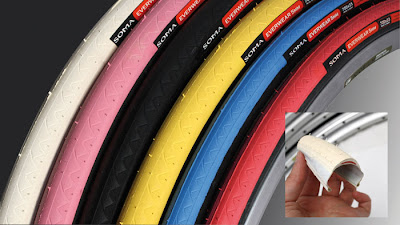 here are the specs:

- Everwear tire with red core to indicate when tire is near worn down
- 5mm thick for longest wear
- Supple but tough rubber
- Round profile for best handling
- Made in Japan by Panaracer.

Protect yourself out in the concrete jungle and snap up some Skullys and Everwears with indicators!
Posted by Stan at 4:20 PM 0 comments 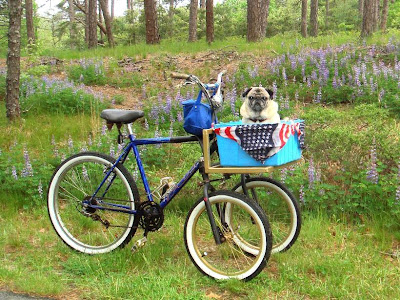 Bring your precious cargo this weekend (be it pugs, beer, cheese or children, etc.) to Sunday Streets this Sunday ! It's along the Great Highway...ahhh refreshing!

Lots of goings on in the city this weekend--all with valet parking c/o the venerable SF Bike Coalition. SF Street Food Fest, and they are also leading a ride down to the dump to see the art exhibit going on there right now(yes, the SF dump has an artist-in-residence...)

Enjoy your bike this weekend!

The photos for our ad already showed up on the Macaframa site and Prolly, so I guess we better break our silence.

Most companies will plan their advertisments out....do a bunch of concept sketches and ad copy, and have a long term plan of where and when to place the ads. You go get one (or two) idea approved by the boss. Proceed to scout locations, get bike builds specced and models ready. Go out and do the photo shoot based on the concepts. Lay everything out. Get final approval. The process is something like that.

Here's how we do it at Soma: We've been waiting for our guy Jason to build up his new Rush Special Edition for a few weeks now, so we could schedule a photo shoot. (He's been a little busy traveling as well with working with Maca.) Last week I heard he finally found an SG75 to finish off the build.

On Monday I texted him something to this effect, "I want to get a photo shoot going ASAP. Want to do an ad for Urban Velo." Funny thing is he misplaced his phone, so he never got the text.
But the next day I get a smart phone picture from him of his new Rush.

I contact Brad at Urban Velo to see when ad materials for the next ish. He says, "They are actually due today, but I can give you till Friday."

I say to myself "Dammit. We can't get a photo shoot and ad done before Friday. We got too much to do already."
So I resolved to do a quick n' dirty ad myself using the smart phone shot. It was nicely composed side shot of the bike against some graffiti art, but not too sharp though. I e-mailed a draft of an ad to Jason to look over. On Wednesday morning he calls me and says he wasn't feeling the copy I had written nor the photo he sent me and that he arranging an impromptu shoot this morning with his friend, Jayne. He promised she would send color corrected shots to me by mid-afternoon.

And in a few hours she DID -- to my surprise. The only thing that resembled professionalism in this process. The photos looked awesome, too, despite us not offering a lick of art direction. We didn't tell him how to build his bike or where to shoot. We probably would've suggested that he didn't slap so many stickers on it, but this is HIS bike, not ours. So we didn't sweat it; more legit we guess.

Julia (the other creative here) and I spent nearly the whole day working the photos into a variety of layouts. Finally finished about an hour ago. So despite our lack of planning, a misplaced phone, and that on Monday, we had absolutely nothing to work with -- everything seemed to come together OK.

Hope you get a kick out of this astonishing but true tale of working in the bike industry.

This is Jason's second Rush. He finds it a great frame for the type of rider he is...which fast, graceful, and a little insane. He's a stand out talent among fixed gear riders and we are glad he is riding a Soma. 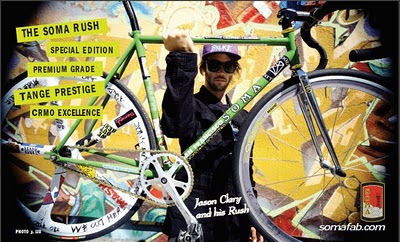 One layout idea we were considering. Click to embiggen.
The actual UV ad we will keep under wraps. Photo by Jayne Liu

NO CASSETTES PART 12 JASON CLARY PART 2 from FonsecaFilms on Vimeo.

Jason doing what he does best from FonsecaFilms on Vimeo. 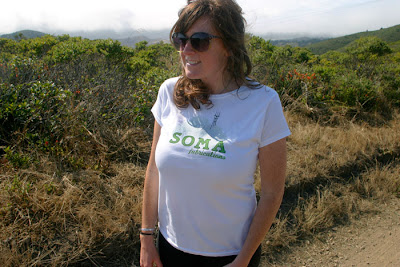 Inspired by our Sutro headbadge, these shirts feature two of San Francisco's most distinguishing features, the Sutro tower and Sir Fog (who's been hanging out with us quite a bit this summer). We made them in men's and women's sizes, sweeeet! Awesome illustration, comfy and nice cut.. get 'em while they're hot!! 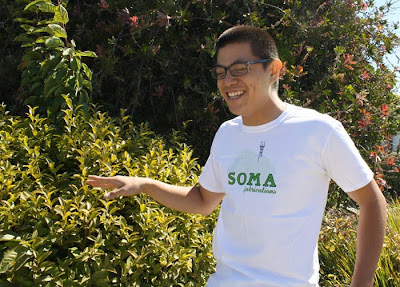 Ok, so Kevin didn't know when we hired him that his job description included modeling, hehe.. 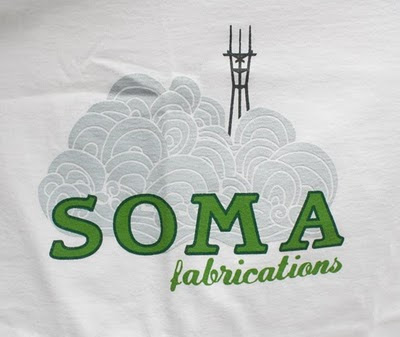 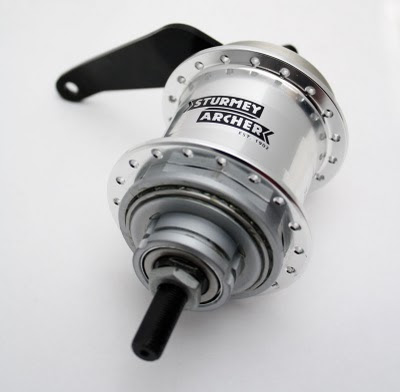 The Sturmey Archer Duomatic Kick Shift 2 speed hub with coaster brake
They're only been in the states for a couple of weeks, but they are making quite a splash. We've been seeing a lot of unconventional drivetrains recently. People are making high-end coaster brakes....does anyone else feel the wind shifting?
Posted by Stan at 9:53 AM 1 comments

Copper Crane Bells, 650B tires=new stuff in the Soma Store!! 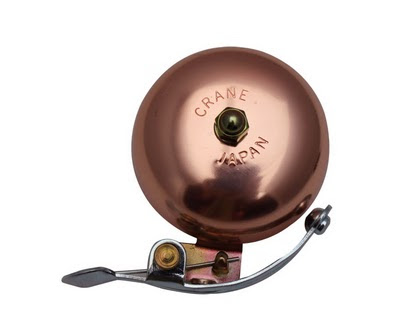 Beautiful copper Crane Bells!! Look and sound great! Pictured above is the Suzu and we've also got the Sakura which has an alloy clamp. I've got the Suzu on my mixte and I am quite fond of it! 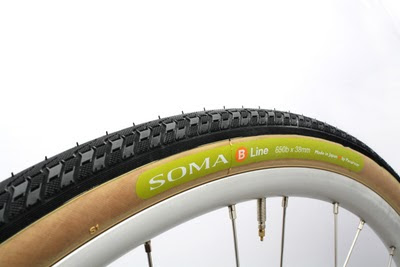 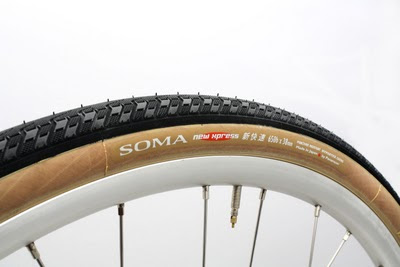 The specs:
- Uses HyperTex Casing which offers extra puncture resistance without the harsh ride quality of a Kevlar belt.
- The casing reduces the tire’s ability to expand to a full 38mm.
- Raised Pasela tread
- Made in Japan So much going on this weekend in SF...

***And if you're feeling like a ride through the city followed by that aforementioned picnic in Dolores Park you can look forward to the awesome new bike lane on Townsend!

Everyone hop on your bikes this weekend and enjoy! Blacktop is Bakersfield, CA's only mobile bike boutique. They are a full service repair shop that comes to you, but they don't only do repairs and tune-ups. They can special order hard to find parts. They can build you a dream bike from the ground up, which is how we found them. They had a couple of awesome Soma builds on their blog. Above is a VanNess with a Soma Sparrow w/brown Velox Tape (shellac'd). They also have a Buena Vista build up there, too.

Since they took the time to post some nice photos of our bikes on their site, we thought we'd return the favor and give them some publicity here.
Posted by Stan at 12:24 PM 2 comments 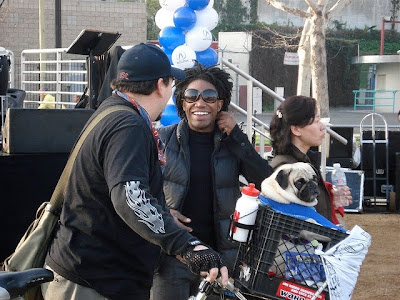 From Fairbanks, Alaska To Our Backyard 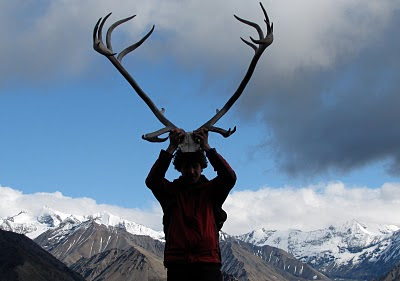 We want to highlight one such a bast-- ahem -- individual today. His name is George. He says he works at Virginia Tech (I guess he's on summer break. ) He has been on the road since June 7th, starting his trek from Fairbanks, Alaska down here to San Francisco. (That's nearly 2,500 miles) He should be in the Bay Area tomorrow.

He is doing this not only to view and breath in the rugged allure of the Pacific Northwest or to show that you can travel thousands of miles without a car, but to also raise money for the Center for Biological Diversity, an organization involved in the Gulf oil spill response. He's raised $2000 so far. If you are feeling awesome, you can help him raise more money than miles travelled, because unlike George, you are earning a paycheck this month.

Be sure to check out his blog, Bicycle Pacific NW for more pix, videos (the vids are nicely edited, not lame stuff off a phone), maps and journals. George's main companion on this ride has been his Soma Groove. Disclaimer: George was not sponsored by us for this ride...we only found out about his trip when contacted us just a few days ago to see if he could visit us while he was in the Bay Area. Polite young man...not a bastard... calls before visiting. 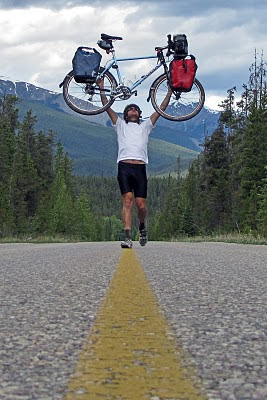 Giving his Soma Groove a lift in return.
Try doing that with a car!

Photo at top: Caribou horns found along the
road from Fairbanks to Whittier
By George Makrinos

This just in...Shotwell Stems in Silver! 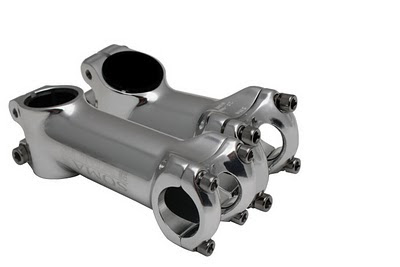 Shotwell stems in silver to match your silver bars! Check out the sleek buffed finish and also our logo subtly etched in the side. They will look great on any bike!

Here are the specs: 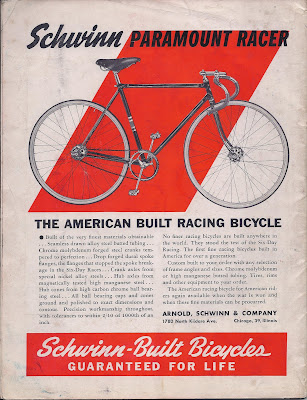 Found this old advert in our archive room.
Posted by Julia at 12:25 PM 3 comments