From Lust To Love: Long term review of a 48cm Soma Double Cross 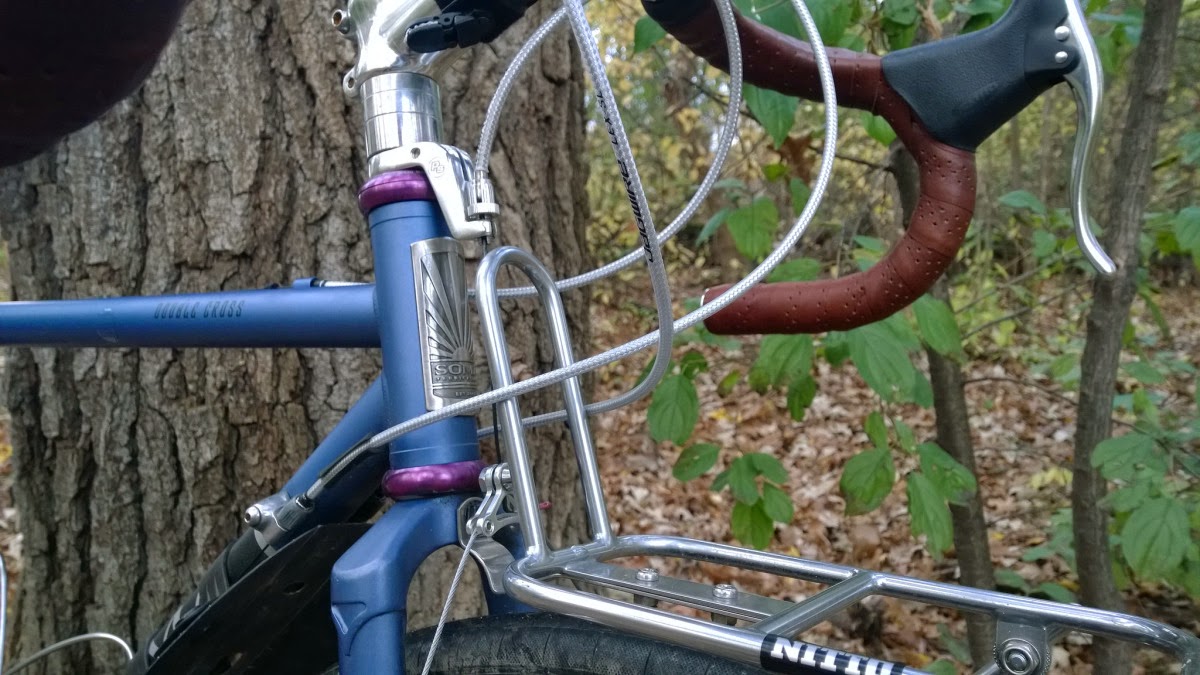 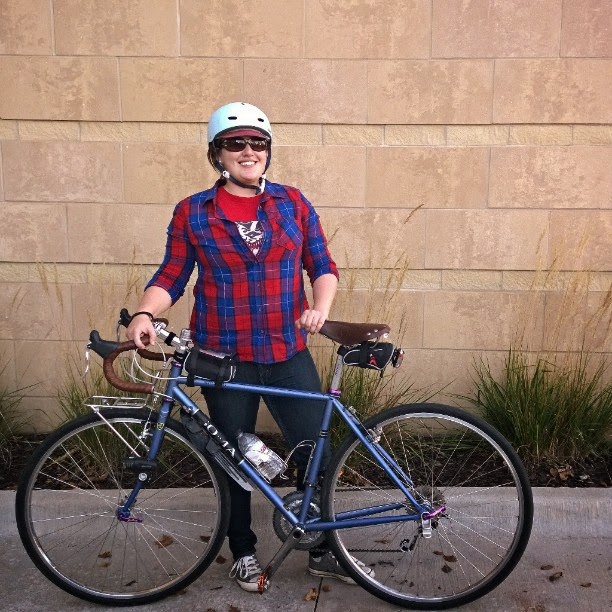 Cassandra, co-founder of Spoke Haven in Madison, WI, didn't need another bike, much less another steel bike. But she had an idea for a fun winter project, something she could build from the ground up. She ended up choosing one of our Gunmetal Blue Matte Double Cross's. Choosing from a mix of new and parts-bin stuff, she ended with quite a fun commuter and light tourer.
The second thing we noticed (the first had to be the tasteful use of purple anodized parts) were the Shimano bar end shifters with Paul Thumbie mounts. ("The Paul thumbies have made me really happy. I used to nail my knees on the bar end shifters mounted on the bar ends") 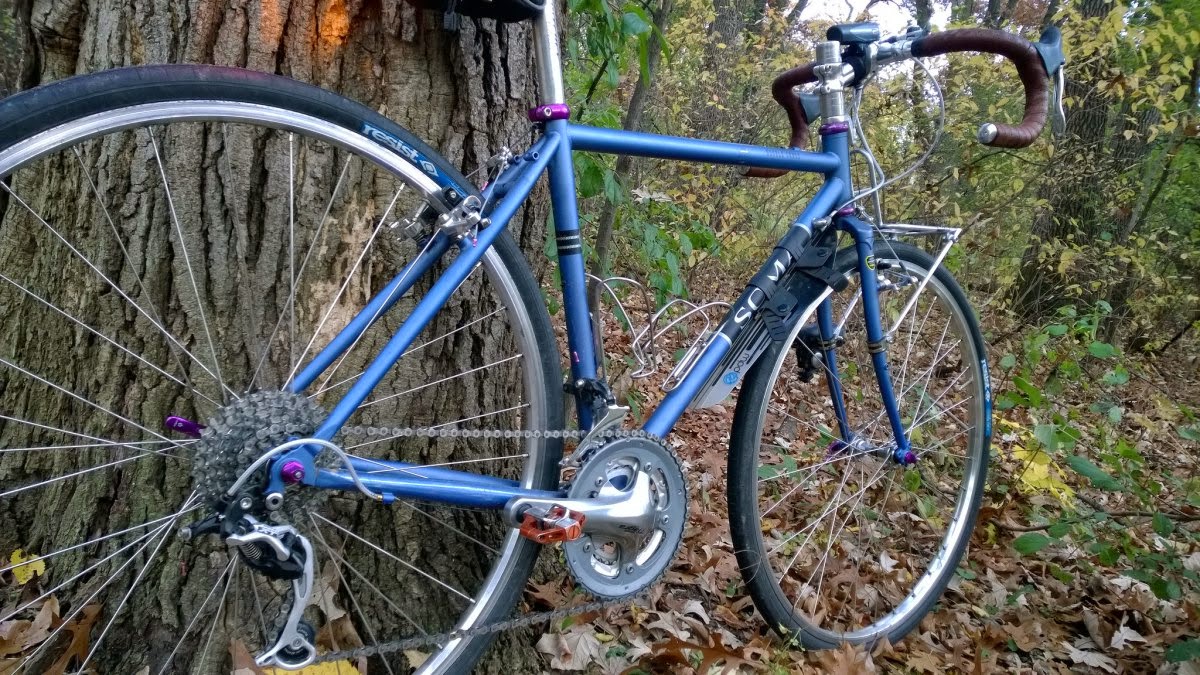 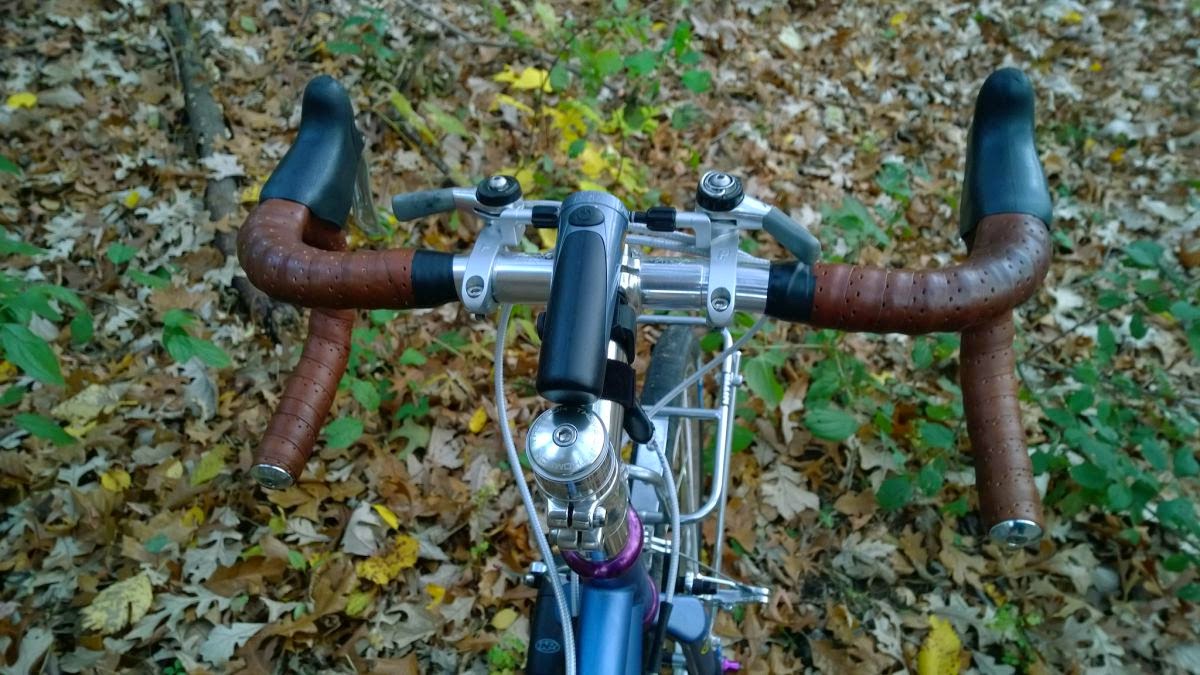 Here is an excerpt: (For the full review and complete build list please go to the Spokehaven blog.)

Soma has done a fantastic job on their overall bike line up and the Double Cross is no exception. I get tons of compliments on the bike and the color of the frame. The pearly blue is extremely classy looking and the powder coat has held up incredibly well. The logos and the frame badge are also gorgeous. Color me in love with the bike and the Double Cross frame. I should note that the newest color of the bike is more of a gunmetal-ish grey, but still very beautiful.

If anyone reading this is debating between the Surly Cross Check and the Soma Double Cross, I would highly recommend considering the Soma. It does has a taller head tube on it which means it’s not as aggressive, but for the price I think it’s just a slightly nicer frame. That’s not to say I’m not down with Surly. I love them as well and would buy a dirt tourer or one of their many cool fat bikes,  but I just love the Double Cross more if doing a straight comparison. One other major plus, for me, is the fact that Soma uses vertical drop outs and not horizontal drop outs. I know why Surly uses horizontal dropouts and it makes for a more versatile frame, but they can be a pain in the ass when changing a rear flat. I also used to have issues with the wheel pulling to one side no matter how tight the rear skewer was on the Cross Check. I haven’t dealt with that what so ever on the Double Cross. 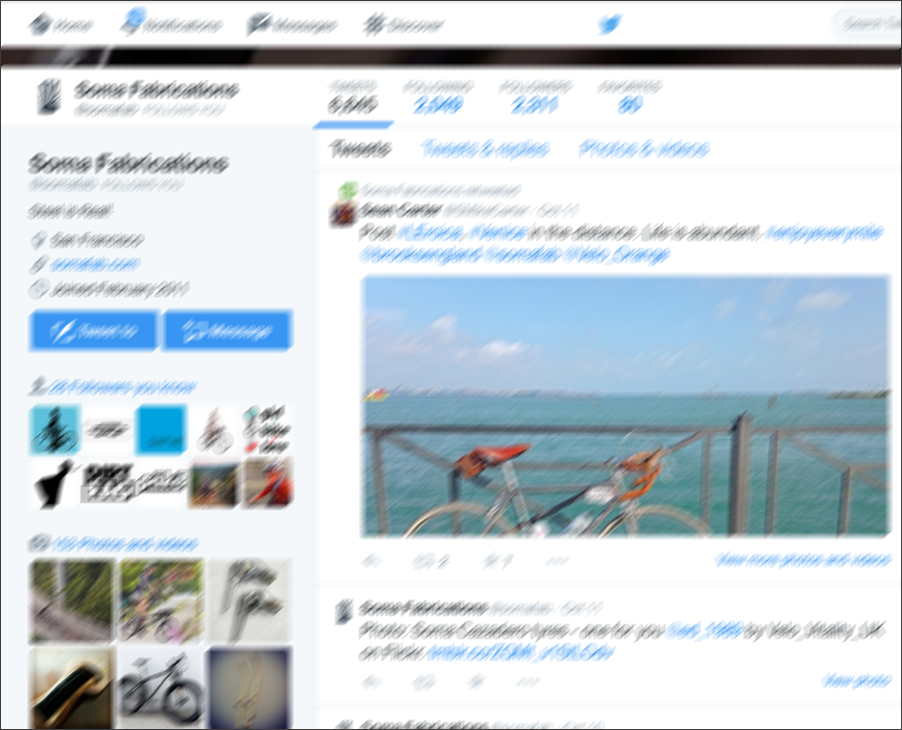 Do you have the makings of a social media maven? Soma Fabrications has a full-time social media,web content/technical support position open. We are looking for a detail oriented, problem-solving/strong bicycle industry background individual with solid customer service skills (phone and email). Our ideal candidate has blogging experience, preferably in the commuting, randonneuring, bike camping, touring and/or bicycle lifestyle sectors and mechanically proficent around different types of bicycles. You will not only Facebooking, Tweeting and Tumblin' Soma, but also working on promoting smaller brands that  Interloc Design Group (aka Merry Sales). has in its portfolio. Send resumes to mary(at)merrysales.com.

Tomorrow is my last day as the ambassador of all things Soma. It's been almost 3 years since I moved back to California and I've loved every minute of it. But now it's time for me to begin something new and time to bring in some new blood at Soma. If you're interested in joining the team, email your resume to mary (at) merrysales.com and let us know a little bit about yourself and your experience in the bike industry.

Since this will be my last opprtunity, I thought I would take a moment to share some of my favorite Soma products from my time here. 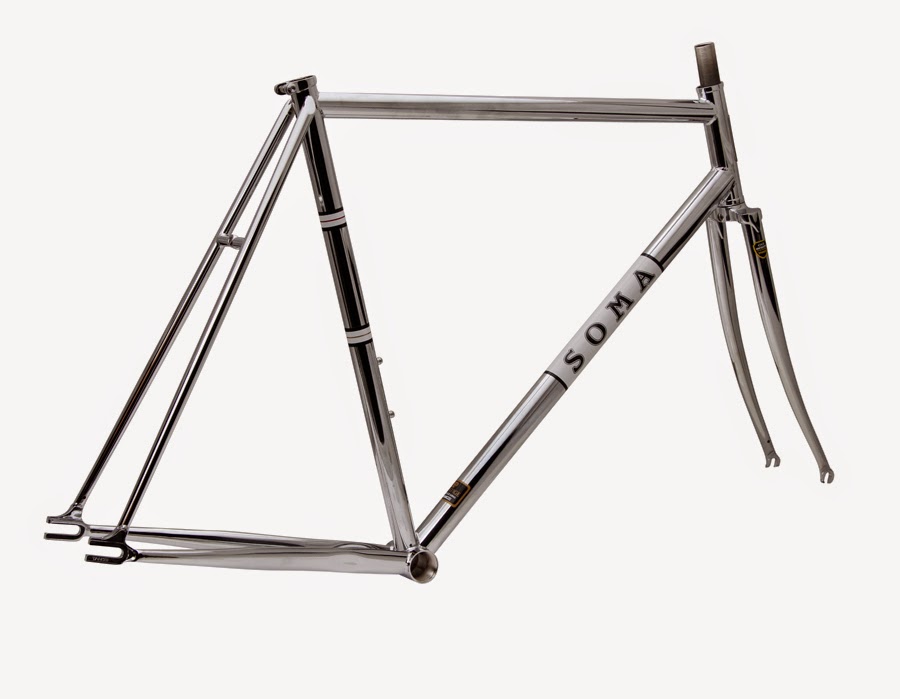 The new Chrome Rush frameset epitomizes everything I love about track bikes. It's clean, simple, versatile and strong. The threaded fork, s-bend chainstays and side tacked seat stay caps allow it to run wider tires, but still gives you a pure keirin style look. 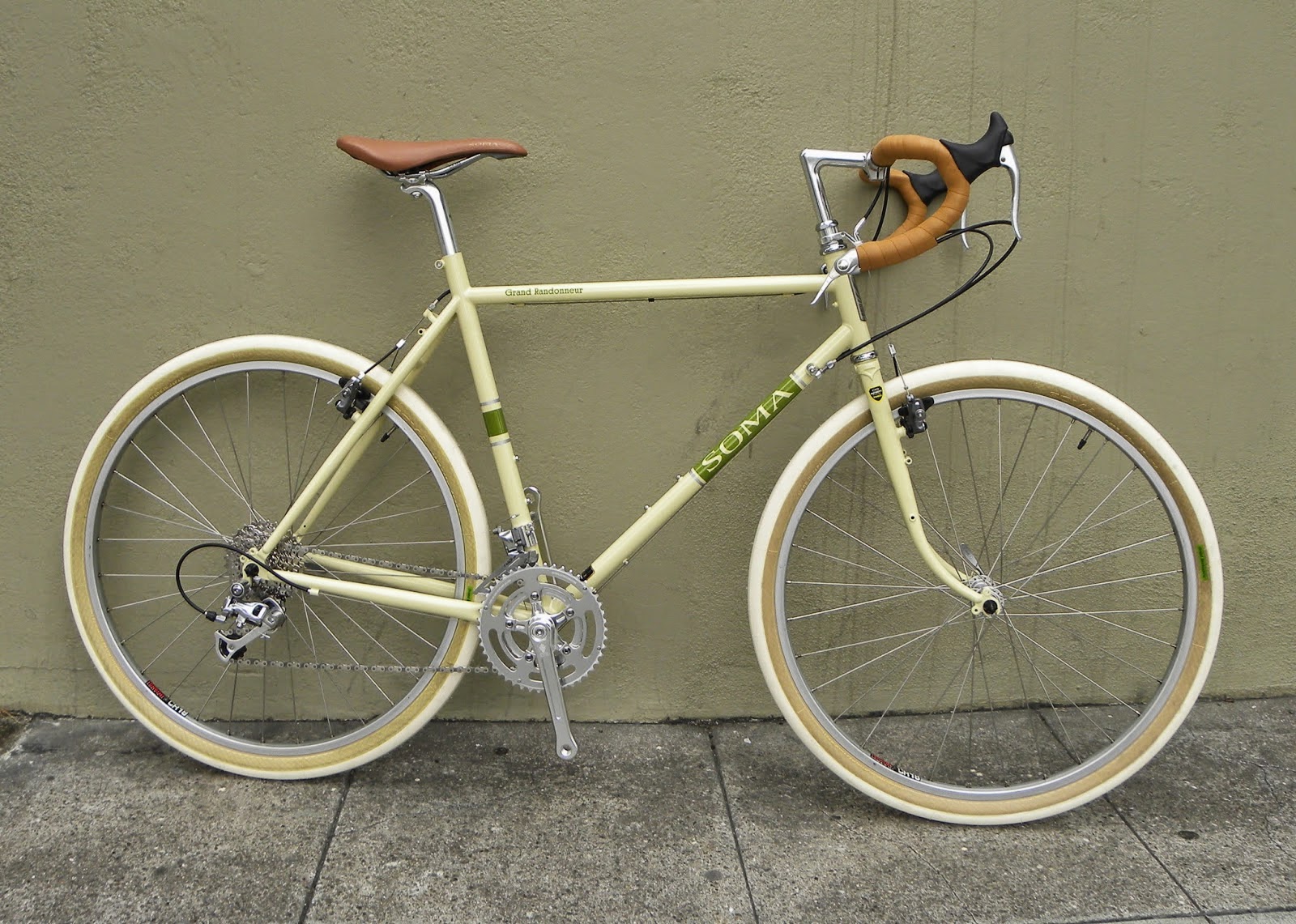 Before I started at Soma I knew I wanted to make a 650b randonneuring frameset. When I learned we were already developing one with Mike Kone from Rene Herse I was ecstatic. We've made a few improvements since the first run, and I think the new framesets look absolutely fantastic. The Grand Randonneur sets a high bar for the industry. 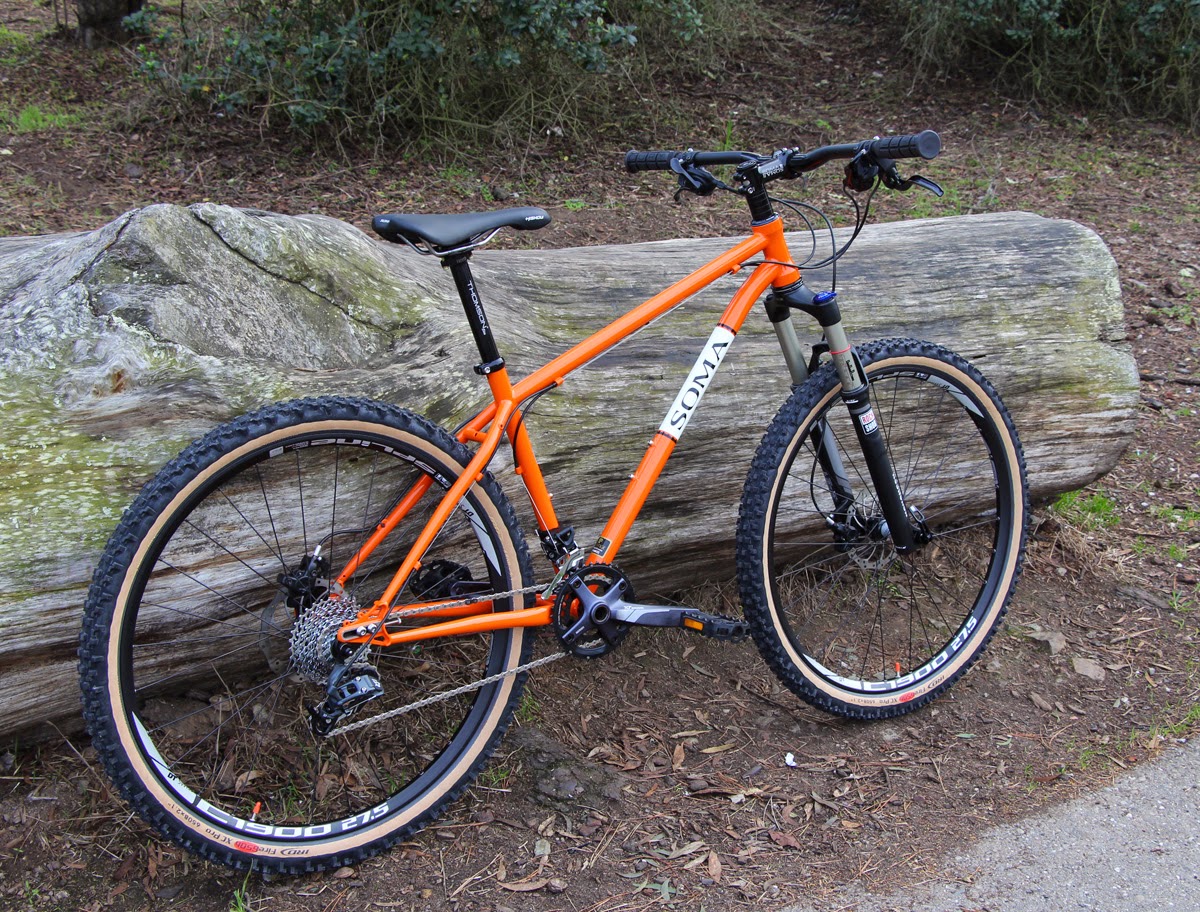 When we redesigned the Soma B-side I knew we needed to make something that could handle the steep, gnarly Norcal singletrack I grew up riding, and this bike does not disappoint.  By going to an hourglass head tube we made it compatible with a wider range of modern forks, and while the B-Side was one of the earliest 650b mountain frames on the market, it's still the best. 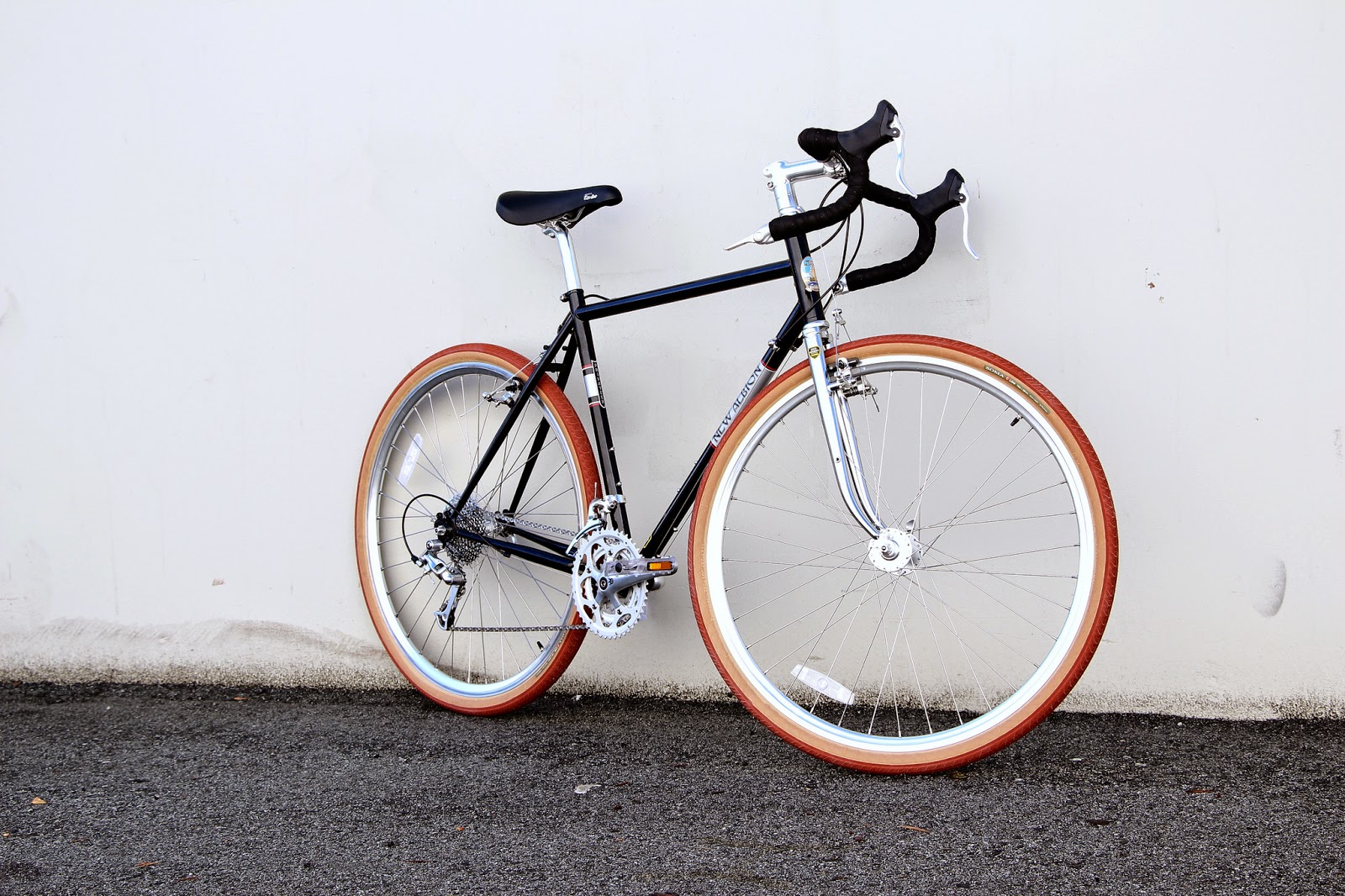 Lauching our sister company New Albion Cycles was one of the most exciting projects I've had the pleasure to be a part of. From designing the head badge, to building the first Homebrew, it's been a real education. I think the Privateer is the very best value in a steel frameset on the market today, and I'm incredibly proud to have had a hand in it's development. 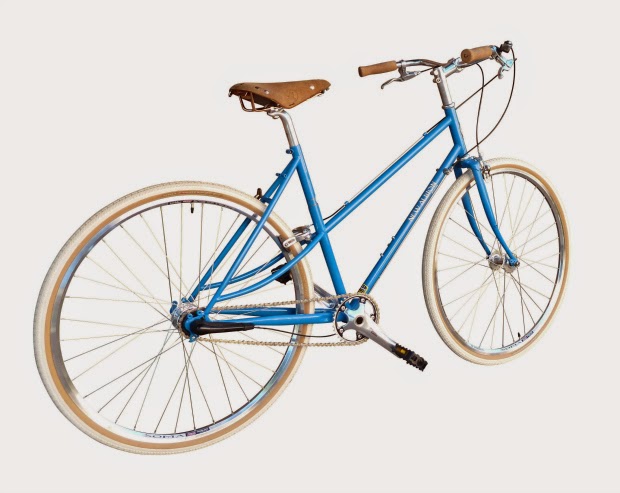 The New Albion Starling is quite a looker, isn't it? 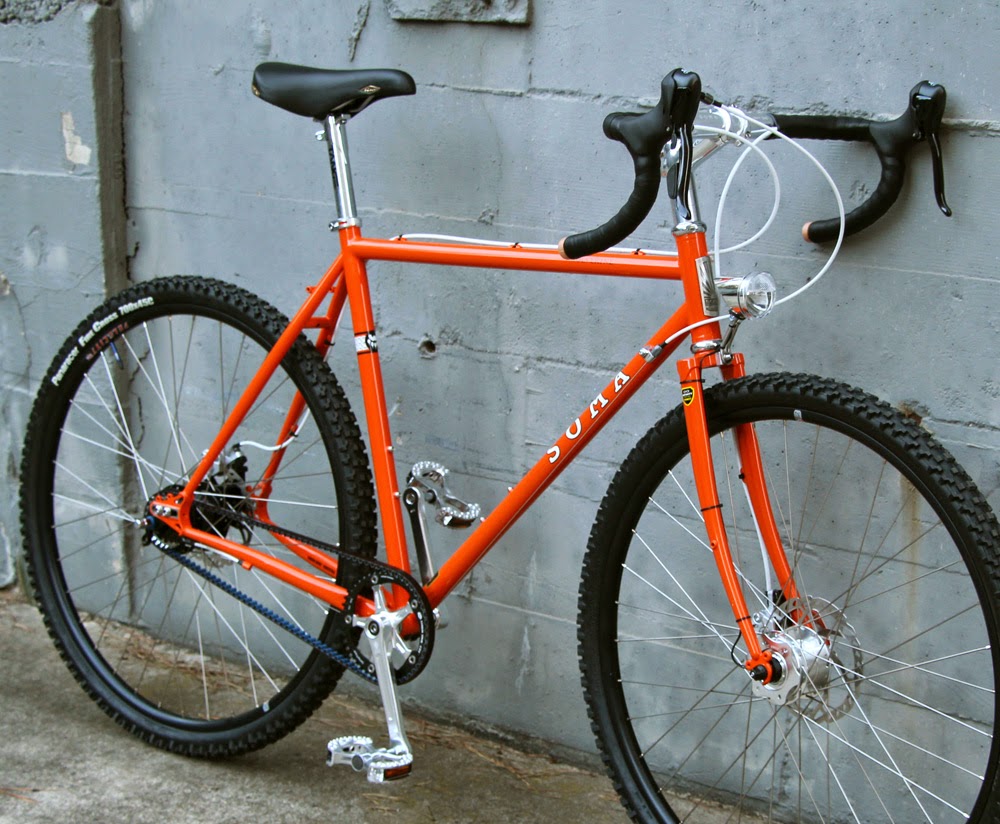 The Soma Wolverine is relatively new, but already it's been making waves in the dirt touring community.  What started out as a belt drive version of the Double Cross has evolved into a completely new beast. Call it Monstercross, Gravel Grinder, Adventure Tourist, or Nouveau Audax if you want. We just call it good fun. The first batch is already sold out, but there are more framesets in production. 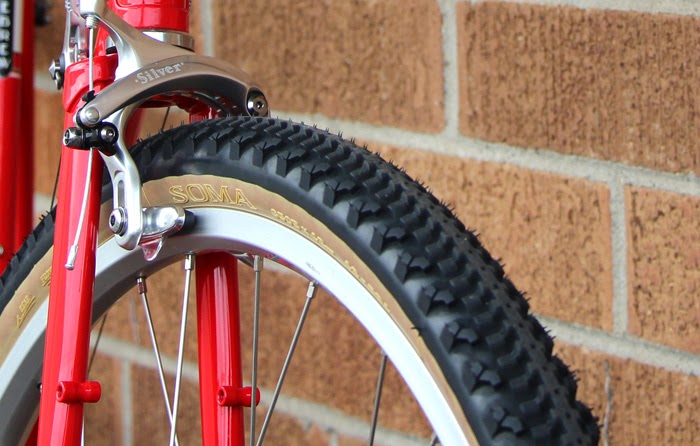 One of the most exciting aspects of working at Soma is our strong relationships with our Japanese component vendors. Working with Panasonic to develop new Soma tires has been one of the most rewarding jobs I've had in the bike industry. The Cazadero mixed terrain tires started as a sketch on the back of a piece of scratch paper, and now they're hitting the gravel all over the world. That just blows my mind. 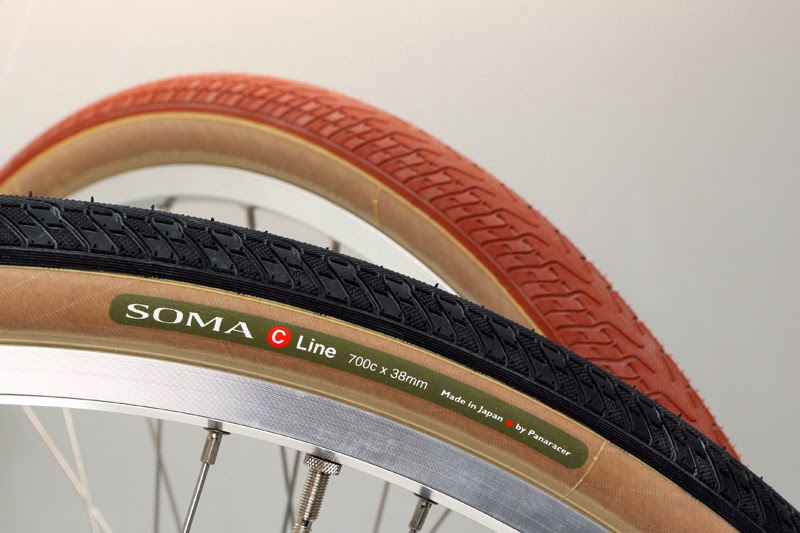 One of first brand new tire designs I worked on was a collaboration between Soma and Ocean Air Cycles. I had already ordered the New Xpress 37c tires and Rob was one of the first people to try them. When he came to visit us on his way back from the Seattle Bike Expo he showed me some of his sample bikes and we chatted about what we liked best about Panaracers tires. He loved the light weight and supple chasing the B-Line tires, and he challenged us to offer up a 700c version. Since there wasn't an existing mold for that size we convinced Panaracer to make a new one especially for this tire. Needles to say, it was a big hit. 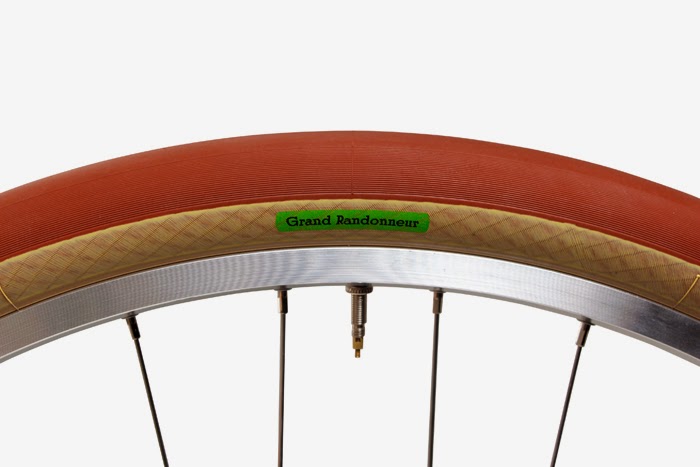 When the first batch of Grand Randonneur frames was complete, I knew the next step would be to make the perfect tire to pair with it. We asked our people at Panasonic for the lightest, supplest chasing they could make and designed a brand new tread pattern that would be super light, but with minimal rolling resistance. After 6-7 months of discussions we arrived at the design which became the Soma Grand Randonneur tire. We decided to offer 2 versions and 3 color options. The blue lable touring version is super tough with thicker tread and reinforced sidewalls, while the green lable is the lightest 42mm tire ever made. I knew we had hit the nail on the head the moment I held them. Now there are many new randonneur tires on the market, but the Grand Randonneur is still the benchmark for high volume 650b tires. 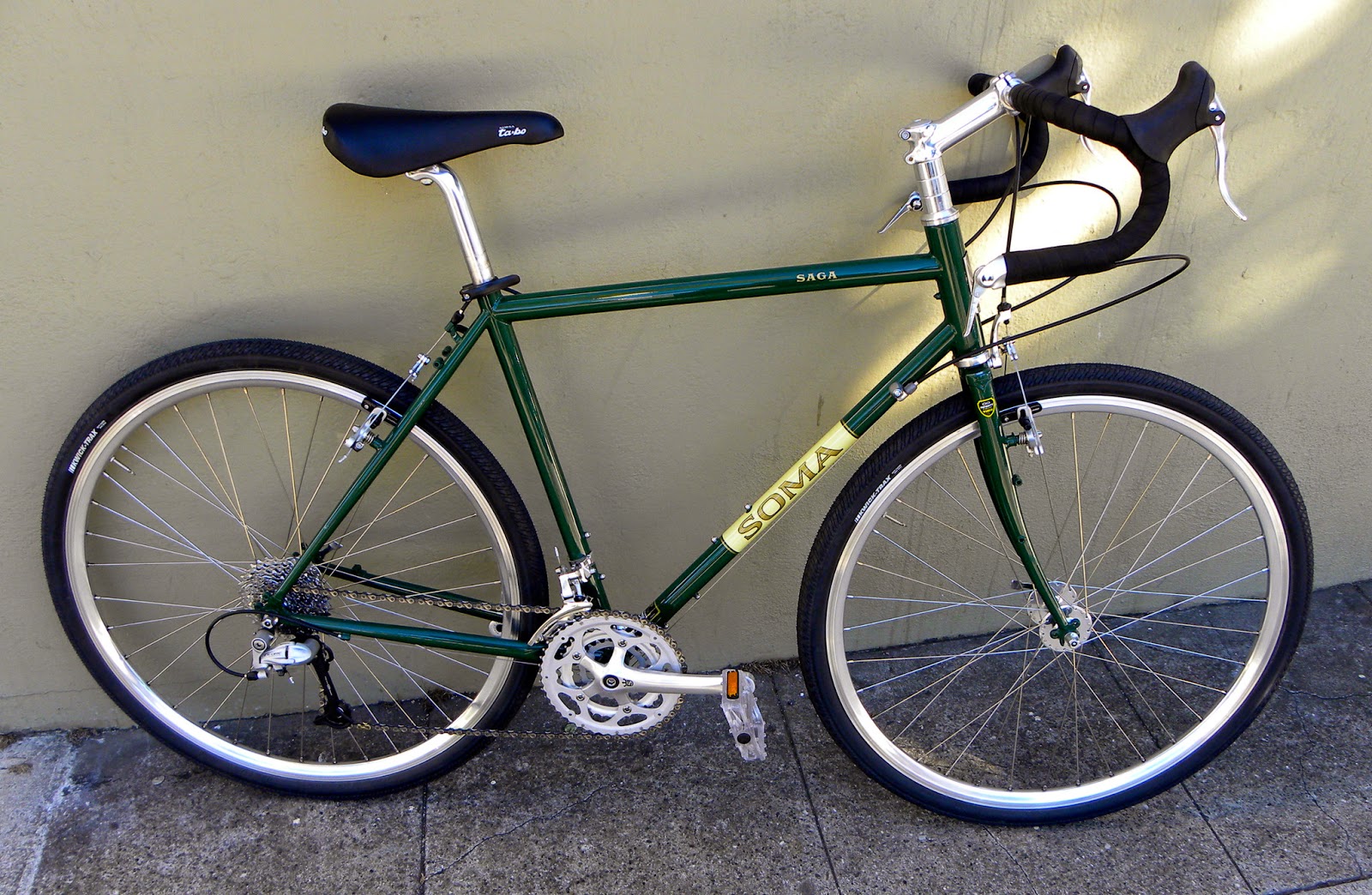 The biggest project I took on during my time at Soma was speccing out the Soma complete bike line. I'm proud to say they are the very best stock complete bikes available today. We worked with our favorite component makers like Sugino, Tange and Suzue to put together my dream build kit, and offer it at a price that's impossible to beat. I can't wait for the 2015 bikes to arrive. They're even better than before. 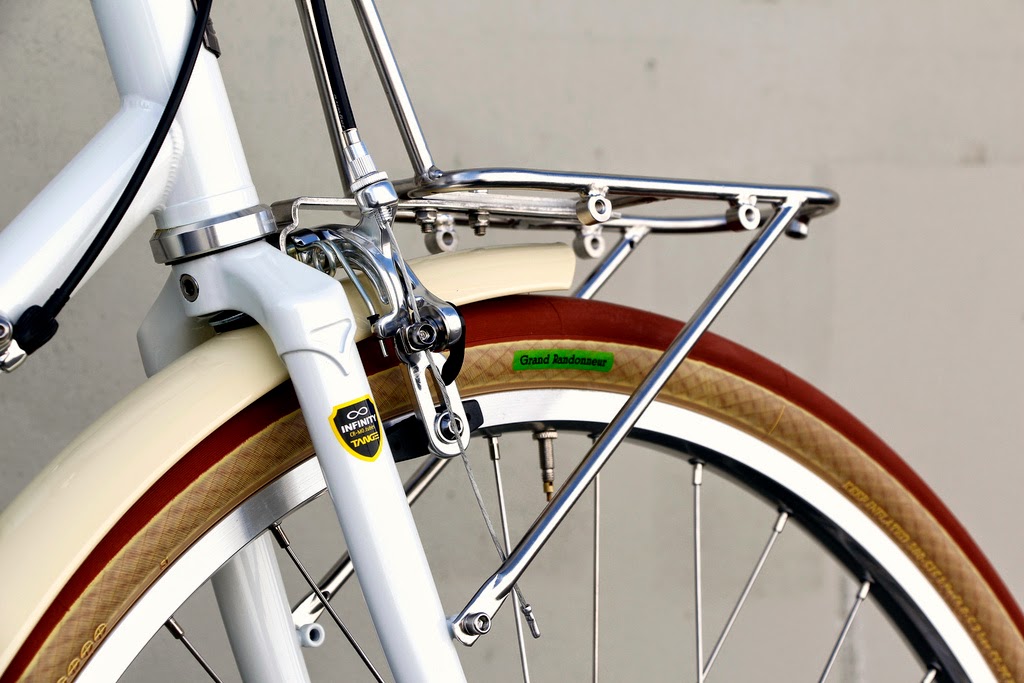 In addition to bikes and tires I got to design a number of interesting small parts as well. The Soma Stainless Porteur racks were so popular we decided to expand the line with a number of other models. For the Champs Elysees mini racks we used Japanese standard mounting dimentions so they would work on forks designed to accept Nitto racks. Accordingly, many of the Soma forks now feature mini rack eyelets as well. 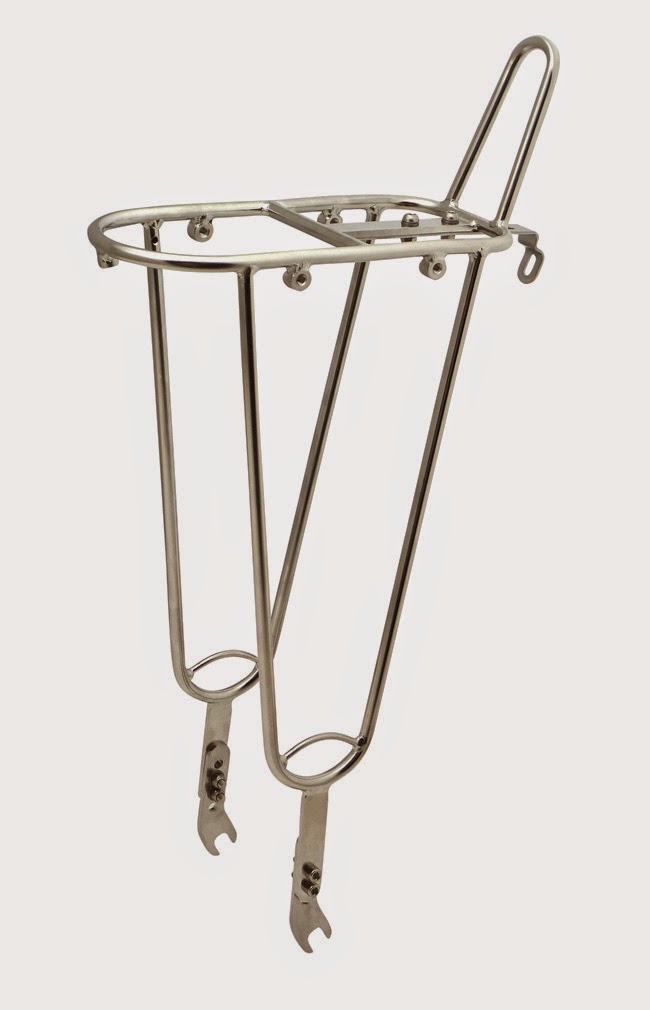 After working in bike shops for years, I know exactly how frustrating it is to try to mount racks to bikes without the proper braze ons. That's why I made sure the Champs Elysses racks had adjustable tabs and axle adapters so they could be use with practically any bikes. I think they look really terrific. 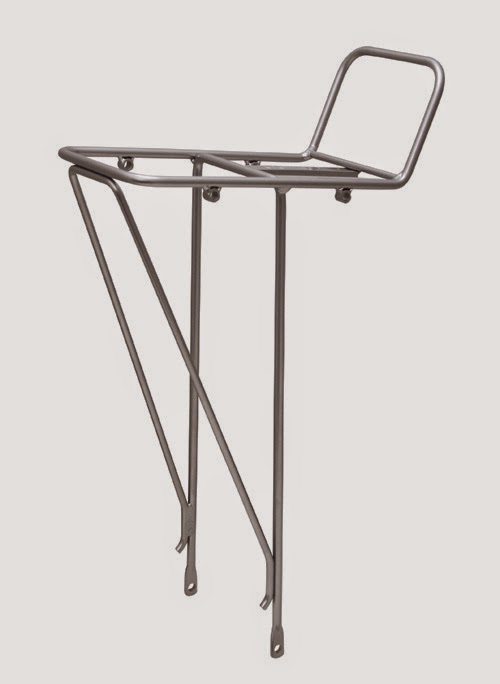 One of my favorite Soma products is our super affordable alloy front racks. I used to sell lots of them to people that wanted a front basket, but needed something sturdier. The new version has a longer tombstone to support a Wald basket and mounting points for zip ties to secure it. 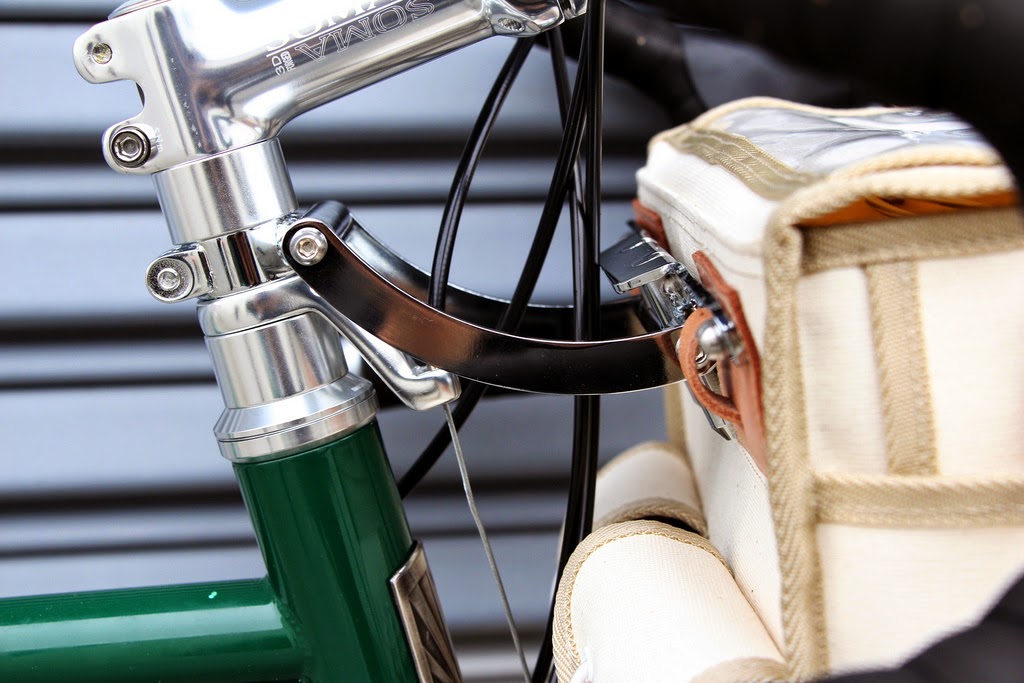 Because Soma has such a close relationship with our component makers, we're able to come up with some off the wall product ideas and they'll make them for us. The Tanaka Decaleur was one such item. I wanted something that was sturdy enough for trail riding, but would allow me to attach my Ostrich handlebar bag without lowering my bars. The result was delightfully elegant, and I'm still using my original sample unit on my personal commuter bike.

The most time consuming project I undertook was the Soma Champs Elysees low trail fork line. We went through many prototype samples before we arrived at a curved shape that lived up to our vision. 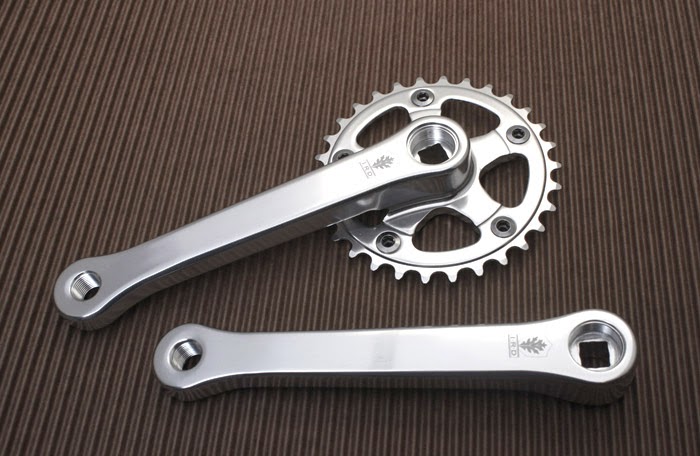 I've always been a single speeder at heart, and when IRD decided to introduce a mountain crankset I knew exactly what I wanted. The Mjolnir crankset combines the style of retro square taper mountain cranks with the strength of modern manufacturing techniques, for a result that's both super stiff and beautiful to look at. So far exactly 1 person has picked up on the comic book reference, but don't feel bad if you're not that nerdy. It's Mee-yool-neer. Not Majolner. 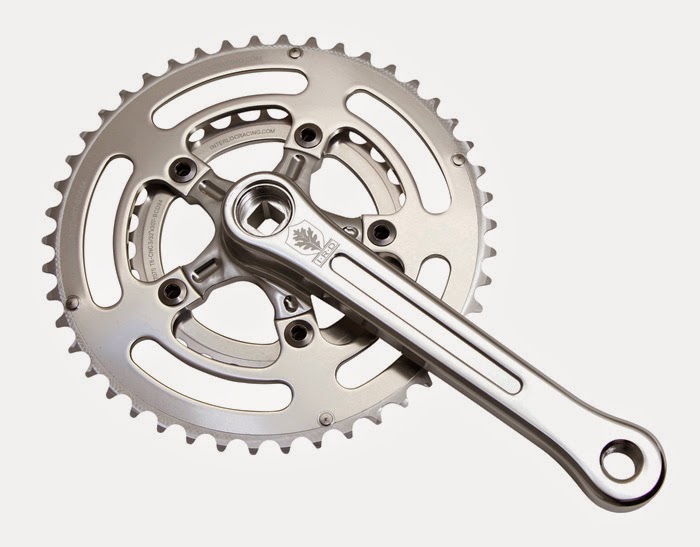 So many people asked whether the Mjolnir would work as a double that we went back to the drawing board and designed a 94mm version of the Defiant double as well. So far it's been very popular with randonneurs, tourists and even some roadies. 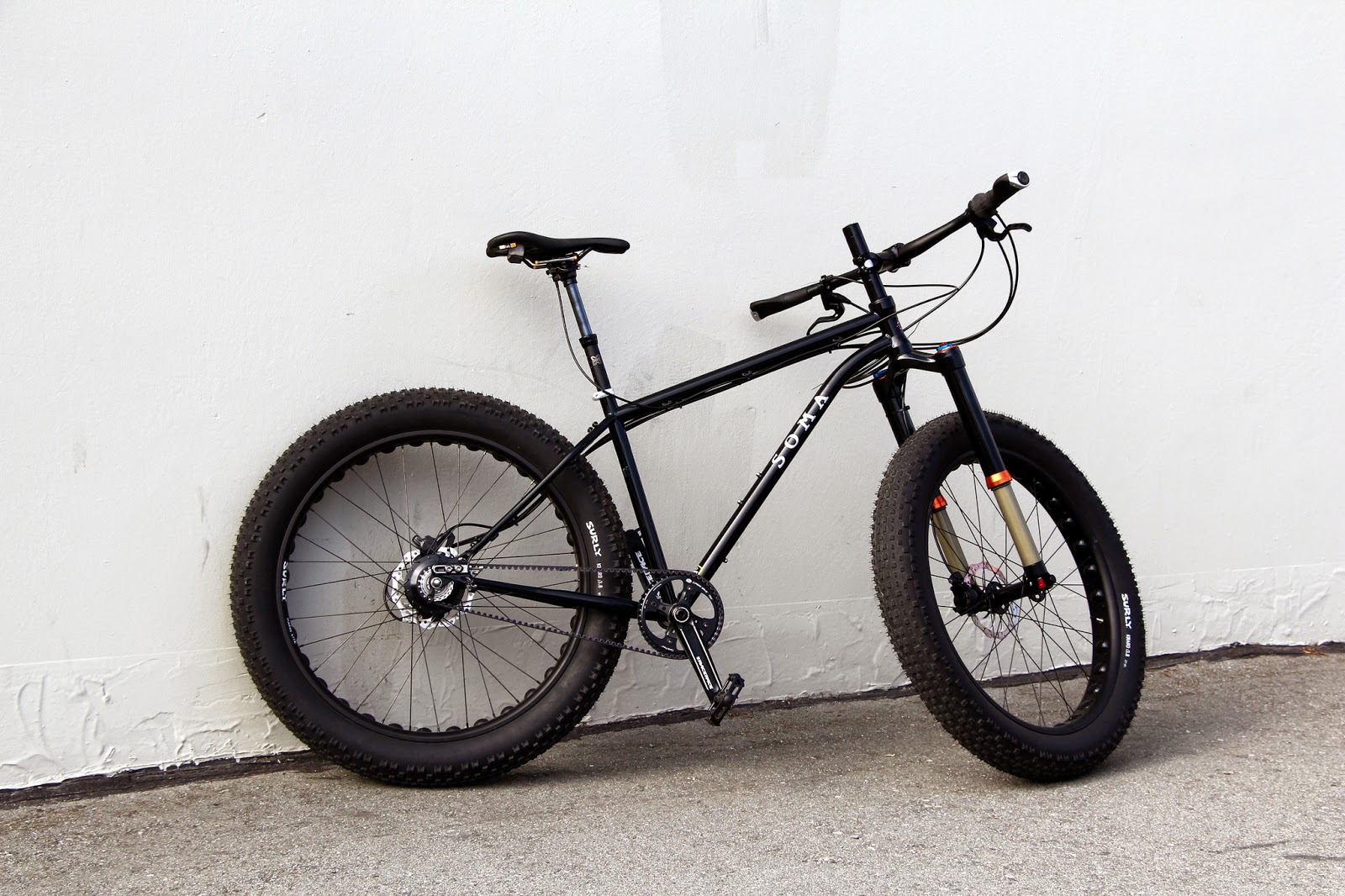 I'm excited to say there are a lot of really cool new products in the pipeline that will be coming out in the next year, including new compete bike models and the forthcoming Soma fatbike.

If you want to keep up with the stuff that I'm working on you can find it all at www.therubbishbin.net
Posted by Bilbo Baggins at 12:20 PM 0 comments 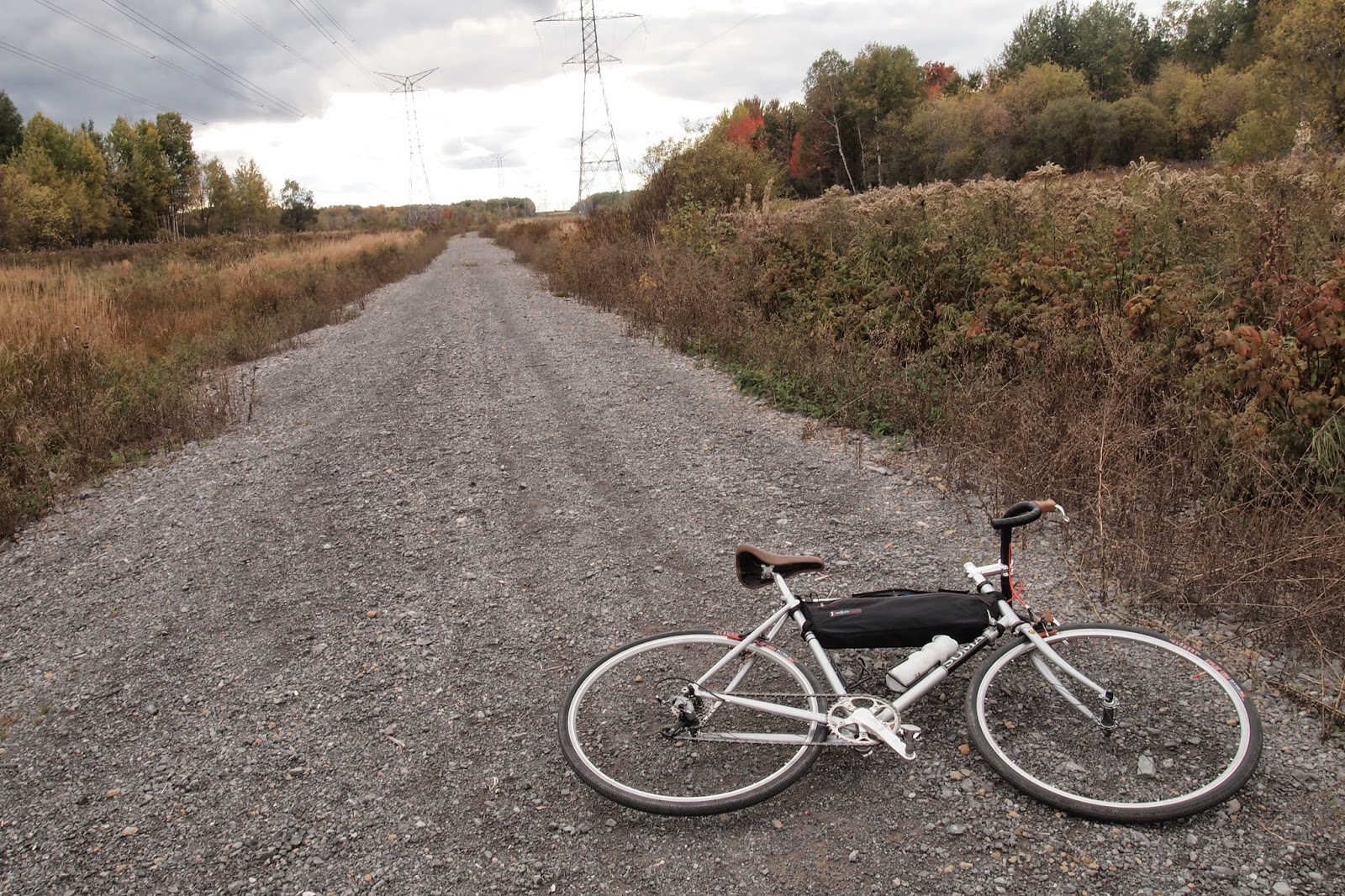 The ES can handle some gravel roads thanks to it's above average tire clearance! 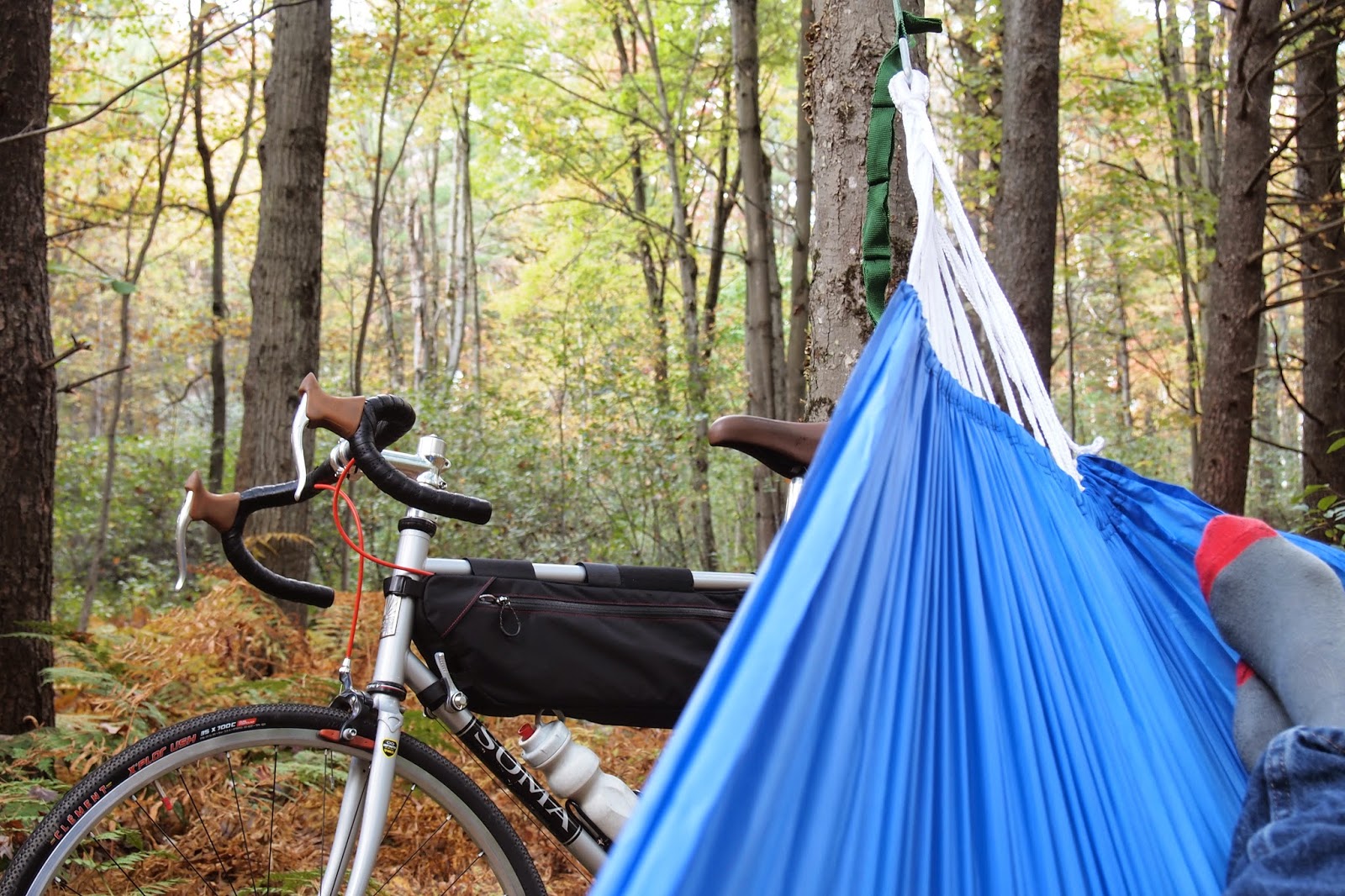 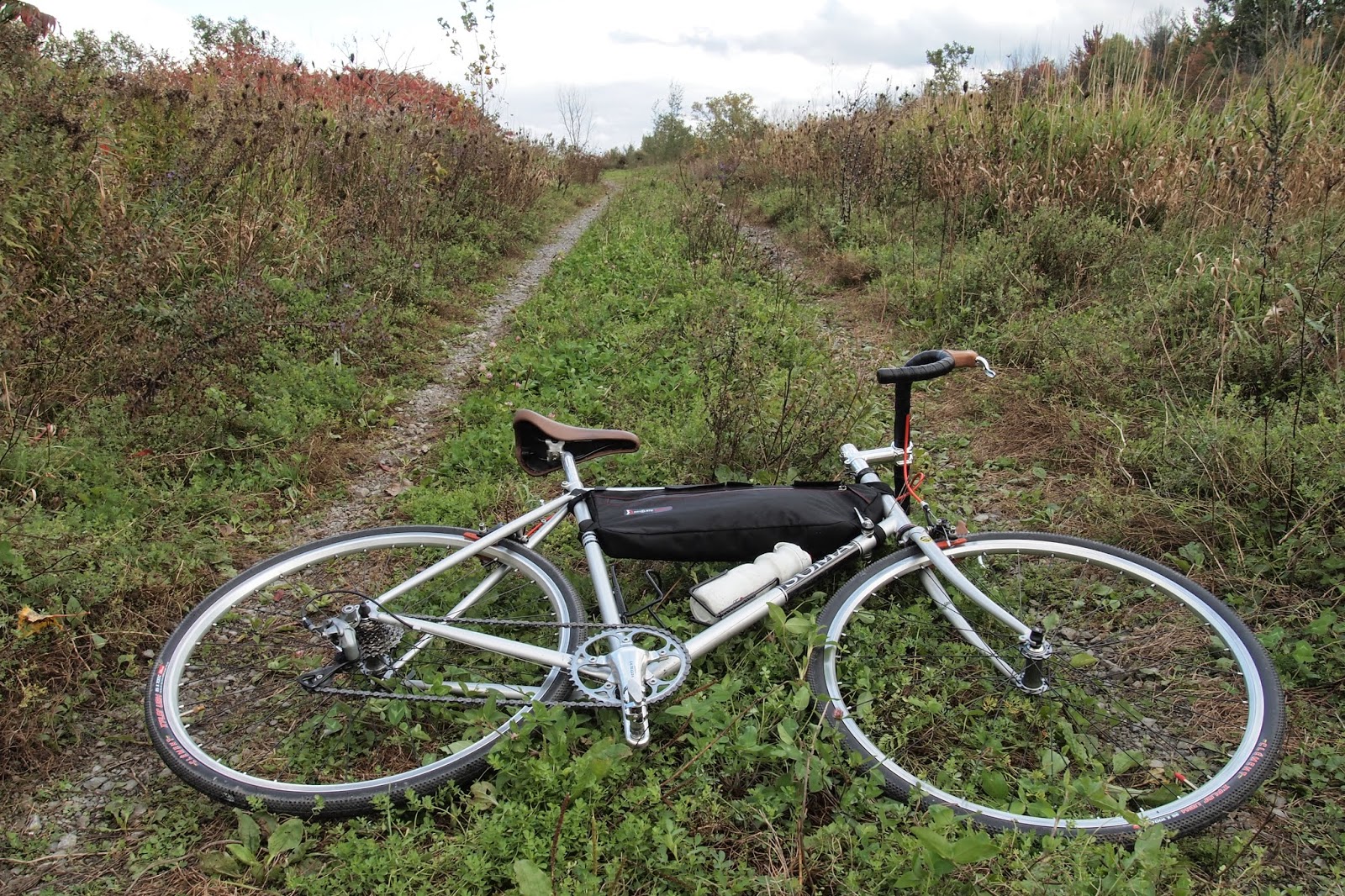 Wolverine Review from Back Alley Bikes in SEA 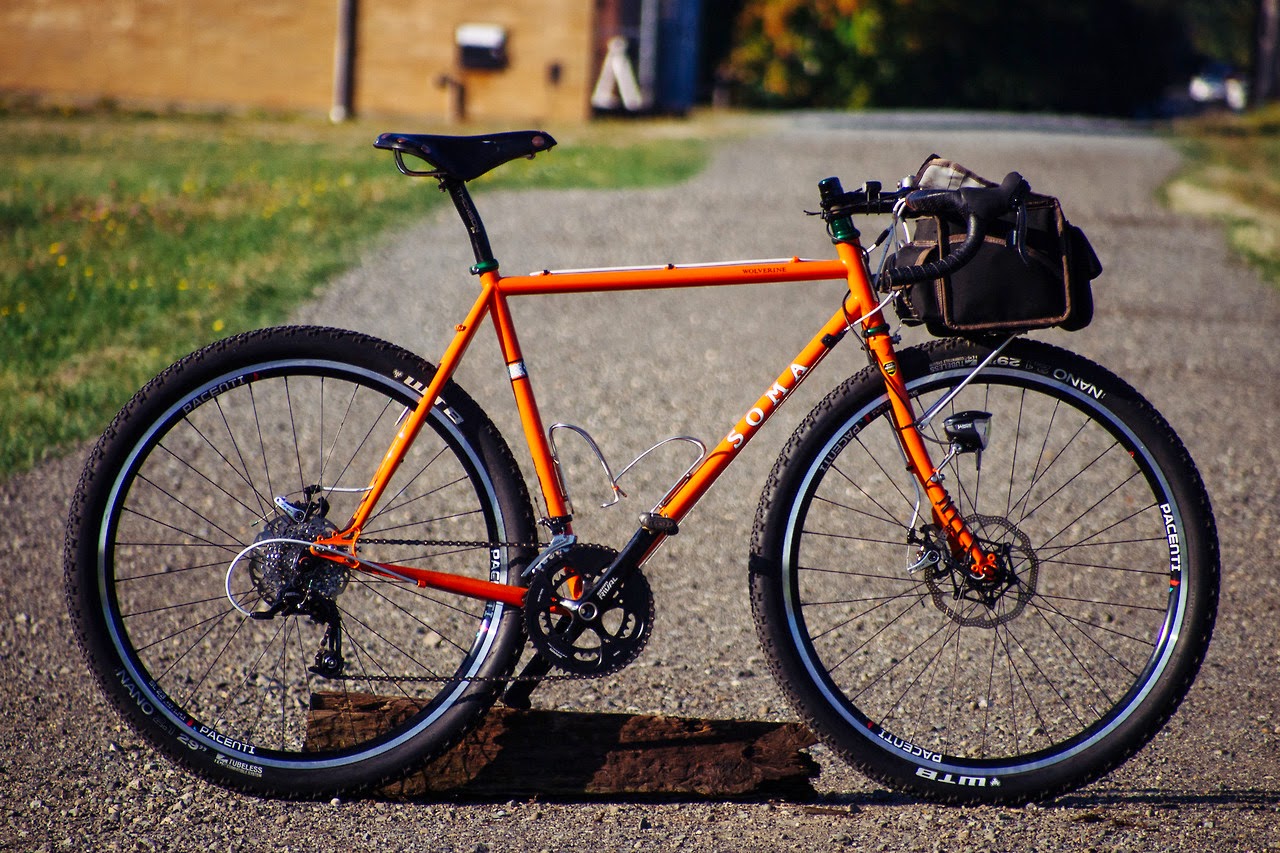 "Riding hands free is no problem, such as when grabbing for a snack, removing a riding layer, or taking pictures. Obviously 2.1-inch trail tires won’t feel spry climbing on Seattle’s hills, but they were fun! Especially cutting through alleys and around the Central District’s choppy streets and all over Beacon Hill. The Wolverine reminded me of when I switched from downhill skiing to snowboarding, and how I viewed terrain differently. Whereas obstacles and tree lines were only for flirting with on skis, on a snowboard I’d duck in and out of trees, I’d head straight for the swoopy humps and get some radness. Same thing with the Wolverine. I started popping off of dirt embankments, skidding into loose corners, and rolling obstacles like on-board a 29’er."

Check out the full review!