Soma Valhallen. You've heard the name perhaps, spoken quietly in dimly lit speakeasies and alleyways. Who is this mythical warrior and what's with all the empty hair spray cans? We'll get to that.

The soundtrack for the video is Tape Waves and was used without permission, because it was already downloaded on my phone and it's a cool song. Maybe check out their Bandcamp and order a physical media. Now back to the story. 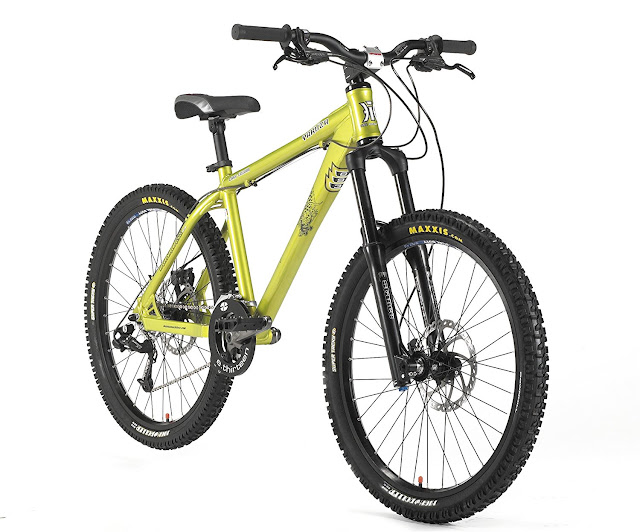 Eons ago, when I was just a wee lass, I wanted a downhill bike. I worked at a shop in Reno called Bicycle Bananas and we sold a crapton of Iron Horse Sundays because Sam Hill was blowing up the UCI downhill scene. That bike was way out of my budget and I thought I was too cool for full suspension anyway, so I ordered up their top of the line hardtail the Waka Gashira. The thing was a beast, with a 1.5 fork (no tapered steerer tubes in those days). It was my dream bike. I rode it all over Reno and up in Lake Tahoe at the Northstar downhill resort. But after a season I was moving to Seattle and in need of some cash, so I sold the bike and that was that. But I never forgot how fun it was to ride a hardtail with a big ass suspension fork. Before long the company hit a rough patch, Sam Hill signed with Specialized and the Waka Gashira became a forgotten relic of the Pinkbike archives.

Flash forward to 2011, I got a job at IRD (Soma's parent company) and I came with a mission to restore the Hooligan Hardtail to it's rightful place in the pantheon of Gnar-shredders. It took a while to convince them that we needed another mountain bike frame in the line, especially since I was all hot and bothered for those weirdo 650b DH tires Pacenti showed off at NAHBS in Sacramento. For a while it looked like it would be just a pipe dream, but finally Fox introduced some long travel 650b forks and we were back in the game.

The Pacenti tires never did make it to market, but by the time we finished the geometry for our new bike WTB had announced their 2.8" Trailblazer tires and we knew it was only a matter of time before more manufactures got on board. We asked our buds at Panaracer to pretty please make us a 650b plus tire and before long they came out with the Fat B Nimble.

The project got put on hold for a couple years while we developed the Sandworm, which is more of a do anything adventure bike, but in 2015 we revisited the idea and decided to include some new interface standards that would enable our frame to offer more tire clearance and add strength and stiffness to the rear triangle.

We decided for the first time we would use a press fit bb on one of our frames. There are a lot of opinions about why you would or wouldn't want one of these, but our reasoning is pretty simple. A PF30 bb shell will let you run just about any cranks you want. Prefer threaded Hollowtech bearings? No problem, just pop in a euro adapter. Want to run single speed? No worries, there's an EBB option. Want to use a belt drive? Ok, get a Sandworm, but still, it's pretty versatile.

We also decided to hop on the BOOOST thru axle bandwagon. Why you ask, when our other frames already fit chubby tires? Two reasons. Firstly, it allowed us to use conventional hollow chainstays, which saves weigh and saves you money. Secondly, we decided to push the envelope and build in clearance for true 3.5" tires. There aren't too many options in that size yet, but the way things are going I don't think we'll have to wait too long.

So you want to know about the name? Fine. It's kid of dumb, but it's my favorite part. Remember back in the 90s when Cartoon Network was really good? I do. There was this show called Dexter's Laboratory created by Genndy Tartakovsky and Hanna-Barbera. Seth MacFarlane worked on it. It was kind of a Rocky and Bullwinkle for kids with social anxiety. In the grand tradition of self aware cartoon series it included references to all kinds of pop culture that was mostly lost on the sober viewers at that time. One bit they had was called the Justice Friends, a parody of the JLA/Avengers which featured the characters living in a sitcom apartment with classic hi-jinx and slapstick galore. I had really wanted to do a frameset named Odin, like our handlebars, but I guess somebody already thought of that. So I checked to see whether anybody had registered the trademark for the viking god of rock, and it turns out that nobody was using it. And Van Halen is ok, I guess. We should have frames in stock this summer.
Posted by Bilbo Baggins at 9:05 AM 0 comments