Bringing Back the Mini Velo and the rim-brake Buena Vista

The Mini Velo project we embarked on almost 8 years ago was not a smashing success in terms of sales. The majority of American bike enthusiasts just didn't see the logic or inspiration for a bike with smaller wheels. 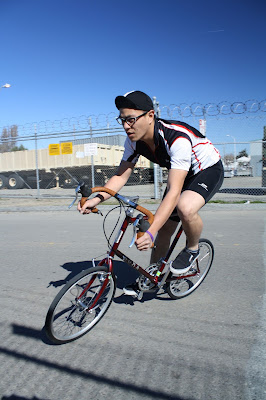 Is America ready now? We don't know. Based on our embrace for huge cell phones, large pick up trucks, and fat bikes, probably not. BUT we do know that even after retiring it, our original post about it still continued to get a significant number of visits. And we will get a desperate e-mail every blue moon from someone telling us we need to bring it back.

So we have decided to produce a few framesets -- not complete bikes as before -- and will be marketing it under our sister brand -  New Albion Cycles. So you crazy kids can build it up with drop bars, pursuit bars or townie/riser bars.

No photos for you yet, but it will be matte red and have the same component needs of the Soma Mini Velo ---- cantilever brakes, recumbent type 20" wheels (not BMX), and quill stem. Same Tange tubing. Almost the same geometry.
Probably ready to sell before December.    UPDATE: Check out the New Albion Microbrew now.
#newalbionmicrobrew

What is a Mini Velo?
The Mini Velo for the uninitiated is a small wheel (usually 20") bike with a rigid non-folding frame. It has been a common category of bike in Japan for years now. Mainly they are specced as affordable city cruisers.  Some big brands that have released urban style mini velos in the US include Cannodale and Orbea. Respect is a small company that sells fixed gear mini velos.
But mini velos have only reached critical mass in Japan and Southeast Asia, where they can take a number of forms -- upright urban bikes, fixies, light touring, mini-cargo, and even straight-up road race bikes.

Why would you need a Mini Velo?
Mini velos are super compact which makes a whole lot of sense if you live in a small apartment or one of those cute tiny houses. They are also easier to maneuver onto the subway or elevators if you are a bike commuter.


Why would you want a Mini Velo?
Most of us aren't that hard up on space. And some of us could care less if a co-worker doesn't like us dragging our full sized bike into as elevator with them.

So what else would attract someone into getting one?

1) Quicker acceleration off the line: 20" wheels spin up faster and easier. A semi-racey mini velo will get a jump on a 700c carbon wonder bike every time.
So with a mini velo might have you not minding slowing down at intersections -- you know -- because you don't want to lose your momentum.

2) For the thrills: Short wheelbase and small tires mean most are more responsive than criterium track bike. Perfect for dodging potholes that are always a threat at ruining your day on a 20" wheel bike whether it is a mini-velo, folding bike or BMX. They have a smaller tire patch too.

If you are riding one at speed, you will want to be extra alert and that might make you a better rider.

3) Show off that big ring: With small wheels you need a full size crank to give you the right gearing.
So you can be in 53t big ring all the time, even when your buddies shift down to their 34t a couple of miles ago.

4) All bicycles have their charm and you believe in the n + 1 Rule.

We added disc brake compatibility and sliding drop-outs to our mixte frame and we thinks it hella dope. And most of you did, too. But we also started fielding calls asking "Is the rim brake one really gone?" So we are considering bringing the rim brake version back in a limited sizes and quantities. 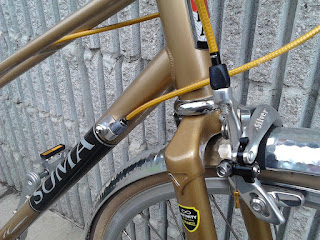