Experiencing the Geographical Majesty and Hospitality of Nepal 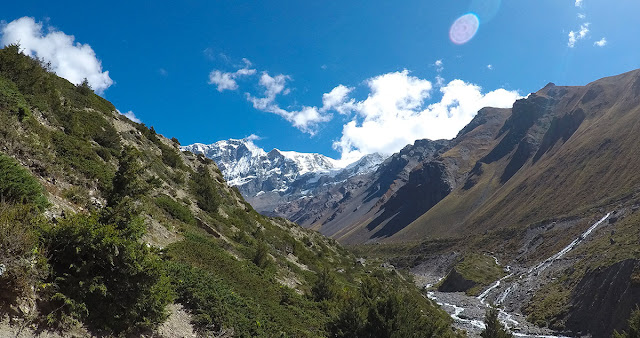 Born and raised in the Sonoran Desert of Tucson, Arizona Elliot Dumont loves traveling by bike. His trips include the Arizona Trail, Continental Divide, Colorado Trail, Mongolia, Nepal, and Baja among many others. Cycling has always been a staple in his life,  since since middle school and it is where he finds himself to be the most comfortable. For this trip Elliot wanted to take a different turn and focus on not just on riding, but explore the cultural aspects of our changing world and using a bicycle for a vehicle of connection with the people and the landscape. I love my Soma Juice 29er and feel it was the best choice for any international trip.


Flying into Katmandu I was struck with the thought that maybe I had bitten off more than I could chew. These were really big mountains. And these weren’t even the big ones. The mountains that surround the Kathmandu valley rise sharply as does the rest of the country. Nepal is about the size of Tennessee with its lowest point being about 1000 feet above sea level and then the land literally skyrockets upward to the height of Everest at 30,000 feet. My plan to ride back roads from Kathmandu to the Annapurna circuit, then around the circuit and find a bus back to Kathmandu alone and self supported suddenly seemed figuratively and literally much more daunting than I had thought.The airport was full of adventure-seeking tourists and business people as well as local Nepali. Outside the street was full of hired drivers with signs with a lot of yelling in Nepali for taxi cabs. The dust from the dirt road rose as cars passed by in the thick humid air. The heat of the sun was penetrating. The monsoons were nearing a close and though rainstorms were frequent, the sun had dried the roads. The ever growing population and traffic made the air quality in Kathmandu pretty poor. Traveling through the streets packed with people, the life of the city ebbed and flowed around the narrow streets and along the stalls selling tea, dahl baht, all sorts of steamed and fried goods, clothing, tailor services, kitchen equipment, and motorcycle shops.I pulled into the hotel unloaded my bike box, checked into my room, dropped off my luggage and quickly assembled my Soma Juice 29er. It was my vehicle of choice for this adventure. A sturdy frame that was a great ride when I rode across Mongolia. It had the dependable handling and comfortable feel I wanted knowing I would be navigating some pretty gnarly descents and spending very long days in the saddle. A few days prepping in Kathmandu and I was off. 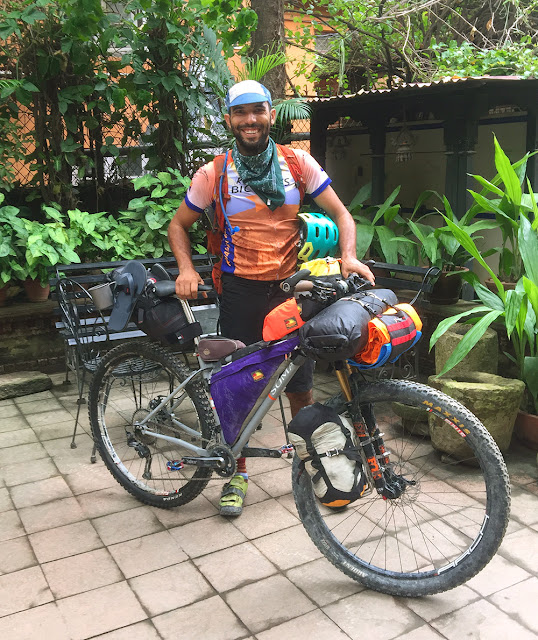 The monsoons had dumped their last bits of rain as I had made my final preparations to leave Kathmandu and the roads were not dry yet. I left the city behind as I climbed into the clouds along the main road that headed north. The road turned to dirt and soon mud. The sedimentary rock that comprises most of the lower Himalaya create a soupy mud like mixture when wet that is great for farming but poor for roads and draining. The roads when wet can be nearly a foot deep of mud and nearly impassible if only by a large truck or tractor. Somehow buses and all sorts of other vehicles find their way along these windy and dangerous mountain roads. I was glad I was on a larger tired 29er bike that could torque through the mud better than a gravel or touring bike.
The hillsides in Nepal are an impressive feat. The people in Nepal have found a way to eek out a living on the steepest terrain. The climbs meandered for miles gaining thousands of feet of elevation before plummeting in a similar fashion down into the next river valley. These large geographic barriers have led to Nepal being an incredibly diverse place with over 100 ethnic groups and nearly as many languages. Due to the rain and the steepness of the terrain, it took me an extra day and a few diversions to get to the start of the circuit. One delay led me to stay at a family’s house. It was getting dark and I knew I wouldn’t make it to the town I wanted to. The sun was setting. I had asked about the location of campsites as I passed through a town earlier. I was instructed to just go to a tea house. I had no idea what a tea house in the countryside looked like. I found this family sitting on their front porch. I pulled over. Put my hands by my head as if I was mimicking sleeping and said, “Tsea?” (Tea) and pointed to their house. They paused for a second and then waved me over. That evening we chatted as they made dinner. Their grandson was staying with them and he translated for us. They let me stay the night with them and in the morning we ate breakfast together. I paid them what I thought was a fair price and they agreed. It was an amazing experience to be able to connect with total strangers and be in awe of their hospitality. 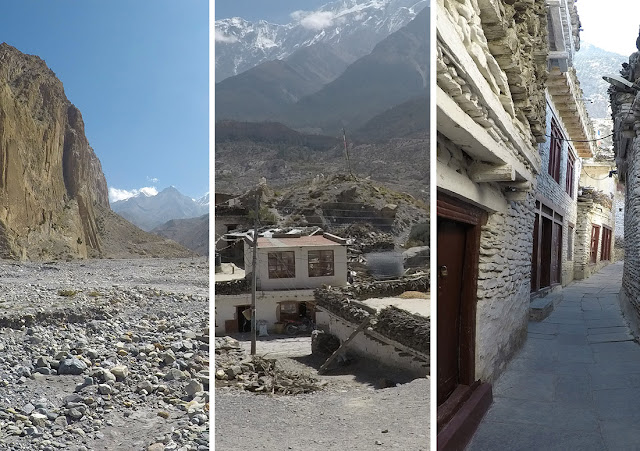 Entering the circuit I was struck by how different the towns were from those in more rural areas. The abundance of hotels and amenities like wifi and western food was reminiscent of home and a sign of how these towns had transitioned to a tourist economy. The road along the circuit was in fairly good shape although landslides were an ever present danger. During the monsoons, the landslide danger grows exponentially with one villager telling me about a village across the valley that was nearly wiped out from a large landslide. The road would sometimes be covered by a landslide and I had to choose between picking my way across the steep debris field carefully or backtrack and ride/carry my bike along the trekking path. Moving further up the circuit, the mountains of the Annapurna range came into view. They were impossible to look at without craning ones neck upwards. They were huge.
The religious mix of Nepal is spread between 80% Hindu, 10-15% Buddhist and the remaining 5% split between ethnic religions and Christianity. These religions are commonly split up along altitude. Ethnic groups that inhabit higher elevations are more likely to be Buddhist and those lower down especially along the border with India are Hindu. It was evident as I climbed along the circuit to witness the change in morning rituals and through conversations with people. The route climbed up to Thorong La pass at around 18,000 feet. Definitely the hardest hike a bike I have ever done. Leaving before daylight, I had strapped my bike and all of my gear to my back, around 80 lbs all together. I slowly made my way through the darkness. The stars were out and the faint moonlight illuminated the distance snow covered peaks. The temperature was pretty chilly, my CamelBak I had rested on my chest pack was starting to freeze over. The sun came out and that warmed the air a bit, but the wind picked up and sucked any warmth away. Due to the weight of my pack and the altitude, I could not walk far or fast. It was slow going. I would take ten to fifteen steps then rest on my hiking poles. After 5 hours and 2,500 feet of ascending, I reached the summit. It was delightful. The descent was amazing and it burned through a pair of brake pads. It descends some ridiculous amount of feet in a very short distance. There has been nothing like it I have ever ridden.

"The descent was amazing and it burned through a pair of brake pads." 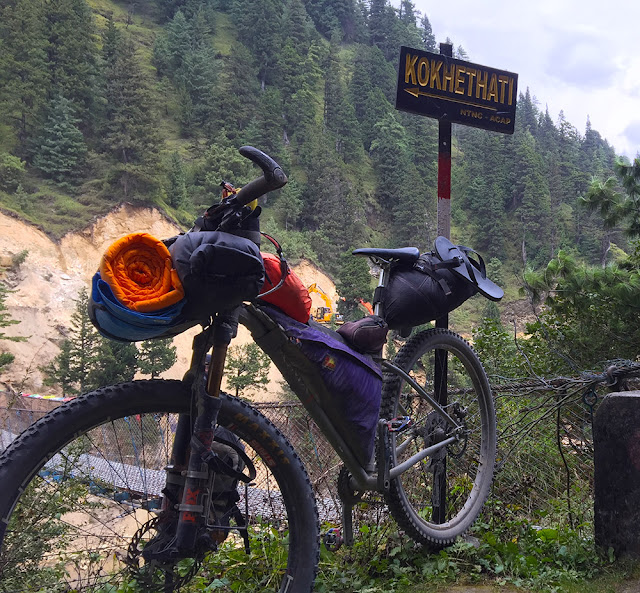 I descended into the lower Mustang region. Upper Mustang, further up the river valley, is the most remote area of Nepal. It has been deemed by the government, in the name of cultural preservation, a protected area that requires a guide and a steep entrance fee to be able to explore that area. I descended through the holy area of Muktinath and further down the valley towards the rain forest below towards Pokhara. The dry arid desert slowly turned to pine forests and then dense jungle. I was blown away by how the descents kept going and going. When I thought I had descended all that I could I would come a vista and see yet thousands more feet I would descend to the next town. I ended the biking portion of the trip in Pokhara before spending a day before taking a bus back to the bustling and chaotic streets of Kathmandu.
It was an incredible and rich experience. I was fortunate enough to speak to many different types of people from all different walks of Nepali life. I found out just how little I knew about Nepal. In the day and age of adventure and the freedom by which we throw that word around little attention is paid to the people, places, and history where these adventures take place. I would like to thank Soma Fabrications for their support and help to get me along this journey and empowering me to be able to research and write a book about this adventurous place and its people. Thank you also to Stan’s No Tubes, Thompson Components, and all of the people that contributed to my Kickstarter. Thank you to my family and my girlfriend for their love and support.