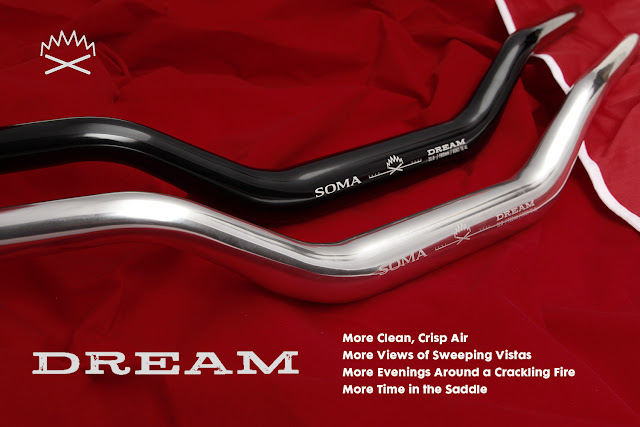 A New Alternative MTB Bar
Darren McKay, the proprietor of Dream Cycle in Vancouver, BC, suggested we create a handlebar similar to the riser bars on mountain bikes of the 1980's. He thought it would be a great option for bikepacking and touring bikes. The Dream bar has a 25° backsweep, which is not only a very natural grip, but also keeps bar bags away from your hands. The 780mm width is more than enough to maintain control control in most type of riding. The 50mm of rise is a touch more than the average trail bike riser. The Dream Bar is in stock now!

CONDOR 2: The Sequel:
The Condor Handlebar, which we launched last year to quite a few puzzling looks and chuckles, has really found its share of fans. A few cyclists are finding it is their solution for back pain, more comfort, less hand numbness.  Many are using it to create a more upright ride position on bikes which don't have a long enough steerer to raise the stem. It is a beautiful design by folks at our distributor in Japan. Tokyo San Esu.

The Condor 2 is the result what we've learned from feedback from Condor customers, including bike shop owners. It is a simpler looking bar, but it actually allows for more useful hand positions than the original. The bend is still compact, but fits slightly larger hands. The drops are 1cm wider on each size, so the 44cm is 50cm at the end of the drops (center to center).
And the big deal is the still the rise, which stays almost the same. The Condor 2 should be available in mid-January