We survived Vegas, and there is never a better time than Interbike to make lots of new friends and catch up with old ones.

We won't go into any serious coverage, because there is no shortage of that sort of thing on the interweb already. Favorite so far: Urban Velo's coverage. Just the week before Interbike we got a visit from Brad from Urban Velo when he swung by our office, and he is an all-around solid guy. We ran into him at the show but didn't get a chance to grab a beer; he was off to post web coverage. Brad and Jeff are a couple of the hardest working guys in the bike business, and when you grab (or download) a copy of Urban Velo, it shows.

We had an opportunity to meet some of the awesome folks behind all kinds of different projects. Shorty Fatz was on hand with a bunch of their beautiful and unique hand-built frames. They were sharing a booth with Phil Wood. 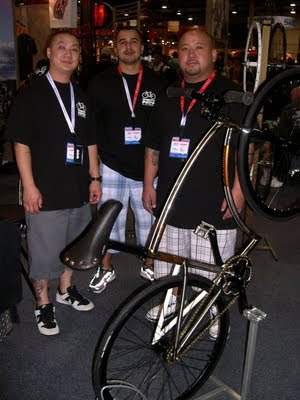 Ortlieb's booth was full on innovative and well-executed products. They had a new medium brown colored version of their Back Roller Plus which will look great with a classy touring build or a more rugged "get lost in the mountains" build (as well as being highly functional). Their removable harness allows panniers to be used as an off the bike backpack is another awesome feature, and watching them demo how the whole assembly snaps together quickly made me wonder what I had been doing commuting without the system. We of course can't neglect to mention the awesome treatment they gave our Buena Vista frame: 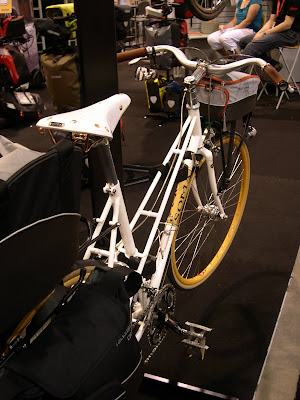 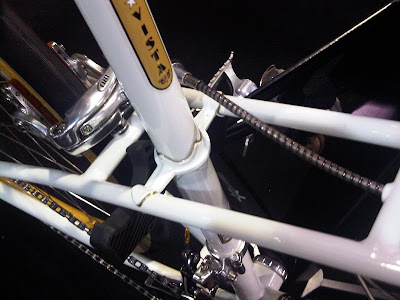 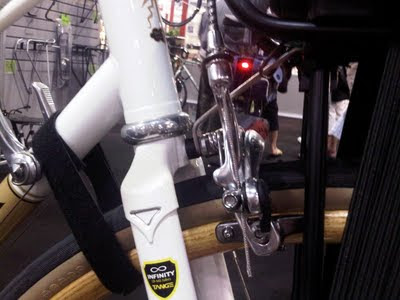 Those are actual wooden rims, and Chris over at Ortlieb took the time to fill in the lugs at the seatstay junction and crown with silver paint, as well as some gold on the Nitto S-83 lugged seatpost.


A couple of us were riding bikes around the show, and getting them there was a time-consuming and costly affair. Here is a box marked fragile with directional arrows, and the subsequent care shown by baggage handlers. (This resulted in a couple spokes getting broken on a DA track wheelset):

Pro men's crit final corner, last lap where the race leader goes down for the lose:

Jason from Superb, barspinning his department store cruiser that he happily returned at the end of the week:

How can you talk about Vegas and not mention racks? Hey-oh!

More seriously, we brought home some of the new Gamoh front cargo rack. 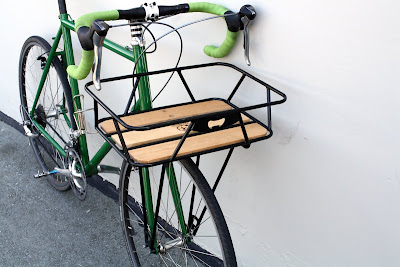 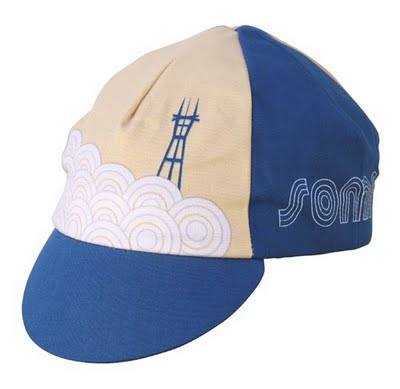 We'll be in Vegas for Interbike tomorrow through Friday. Even though we won't have a booth there (haven't for a while), we did conjure up some schwagg to hand out in case we see some of our great dealers/business associates/new drinking buddies etc. If you are going to be there and you see anyone wearing "The Merry Sales Co." badges, hit them up.... they might have extras.

The rest of yous gotta wait a few weeks till we gear up to start selling them. 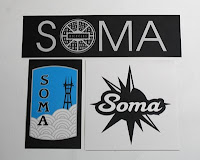 New stickers
Posted by Stan at 10:56 AM 2 comments 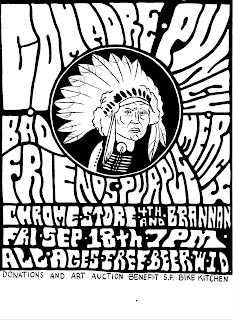 This week on "Stuff We're Stoked On"

We decided to offer up our Shotwell stem in a white powdercoat finish: 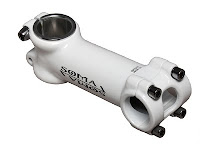 IRD just released their venerable Crossfire tire in white, and we had to get our hands on a set. Just in time for cross season, have the fastest looking bike out there. 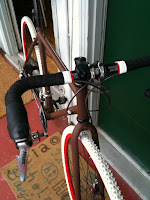 One more bit of shameless self-promotion: we have the Stanyan, Van Ness, and Saga Framesets in stock and are now listed on the Soma Shop.
Posted by Stan at 3:09 PM 2 comments 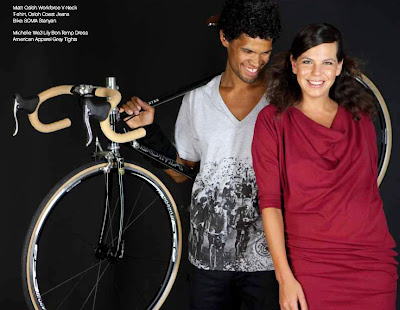 When the ladies at Momentum Magazine asked us to be involved with their bike fashion issue, we were definitely flattered. They have many respected brands in their e-mail address books, so we are glad to be approached. We ended up sending a Buena Vista and a Stanyan frame with various parts to Vancouver shop, Mighty Riders to build up for the shoot. (A big thank you to Ed, who built them up in record time)

All the bikes featured in the shoot will also be part of the Ready to Roll Fashion Show, presented by Momentum, associated with Oregon Manifest and Portland Fashion Week coming up October 10. 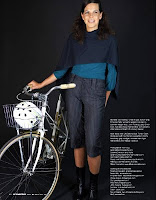 Momentum #41 is available for download now if you don't have distribution in your area. Check out the clothes, the features on Philly and Salt Lake and Minneapolis artist Adam Turman.

Click on images to zoom in. Photography by Kris Krüg
Posted by Stan at 12:55 PM 0 comments 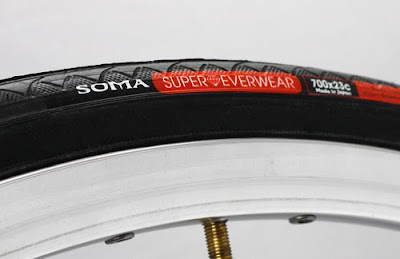 No, we didn't just make the tread thicker. (We already have arguably the thickest, longest lasting tread you can find on a 23c and 26c tires) We mined the brains at Panaracer (while they were sleeping) for the best technology to juice up our Everwears and after a week of sleepless nights we found the mojo.

Now I shall read from the prepared statement:

We aren't going to give it a snazzy marketing name, but trust us, it does its job. Available now in some shops. In a few months, also look for Everwears to finally be available in 28c.
Posted by Stan at 12:04 PM 2 comments 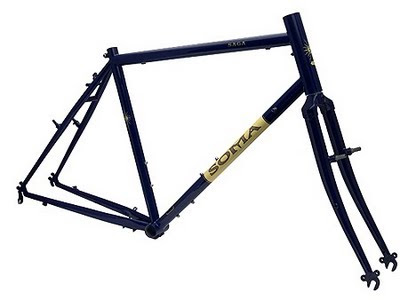 Our first shipment of Sagas have finally arrived. We know we took our sweet time, but in hindsight, we think it was worth taking time to dial things in.

This is probably the only touring frame readily available in the USA of high quality heat treated CrMo (Tange Prestige). When we originally said heavy duty, some people weren't sure what we meant. The goal was something in between a hard core expedition-style "take the kitchen sink to the Himalaya foothills" frame (like the Thorne Sherpa) and the standard "hard core USA tourist" to borrow terms from one of our blog readers. Another way to say it, is we wanted to make the most rugged and reliable frame out there aimed at carrying the loads the average "hard core USA tourist" normally carries.
• We specced a headtube that will probably be strong enough for free-ride use and it's taller than even our other frames to make it easier for you to get that upright position.
• The tube gauges and butts are specially specced for loaded touring.
• We took extra care in adding slightly more brazing material on the rear rack mounts.
• There's even a plate behind the BB for a double kickstand, if you wish to go that route.
• It's all wrapped up in a navy powdercoat with vanilla panels and gold accents.

This picture below shows a pre-production model. Many thanks to Pedal Revolution for the sweet build. More pictures on our Flickr page. 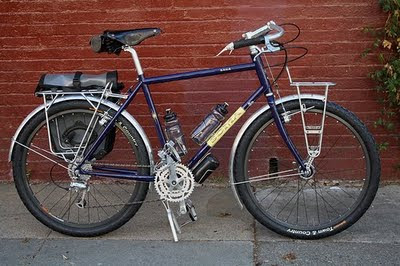 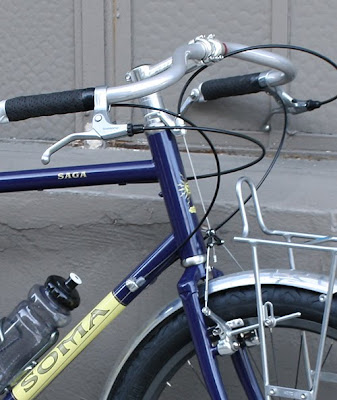