Cape to Kapp: My Savior on the Salt Flats 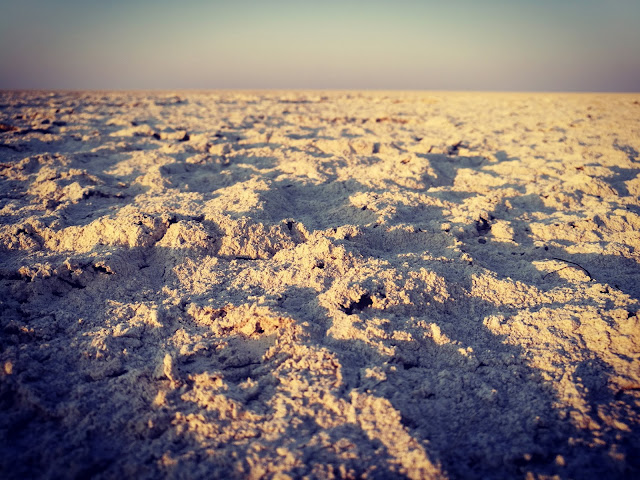 Teresie Hommersand grew up near Stavanger, a city known as the oil capital of Norway. She remembers eating supper every evening off plates with the logo of the national oil and gas company on them. Somehow she became the "green sheep" of the family. She has lived in Uganda, Oregon, and Australia. She currently resides in South Africa. We did not sponsor her the Soma Saga DC she is riding, but will be donating to the charities she is trying to bring awareness to. Learn more about her 13,700 km ride going from South Africa to Norway and her charity crowdfunding campaign on her Facebook page and Instagram.

I am so sad!! I don't have any pictures or videos of Morekisi, my saviour from the Makgadikgadi Pans in Botswana - one of the world's largest salt pans [salt flats].

On day one of crossing the pans on my Soma Saga, I broke rule #1: Always carry enough water!! I thought I was in the clear. By my estimation, I would have enough from the last village to the first veterinary gate on the pan. Pierre 'The Pan Rat' and I had agreed that he would drop water for me there. However, when I got to the edge of the pans I had two mouthfuls of water left and no certainty with regards to how far it was to my next 'watering hole'. It was five in the afternoon. The sun would set in an hour. There were dozens of tracks leading onto the pan in all directions. Do I choose the one that seems to be the most travelled? I could be just 30 minutes away from water. But if I'm not, I might get stuck out on the pan with no water overnight. I assumed the likelihood of the next day encountering one of the about five vehicles that daily cross the pans is greater at the edge than out on the pans. If I didn't meet anyone, I could always cycle and push the 43 kg bicycle back across the sandy tracks to the village - although not very tempting. I decided to stay put. My life wasn't immediately threatened– it was just gonna be a very uncomfortable night and possibly following day, with no water and little food. My pasta doesn't cook in dry air.
Just as I was considering what the most strategic place for my tent would be with regards to attracting possible 'four wheeled' travellers passing by, I saw movement on the horizon. Is that a person? ..... ? ..... it looks like it..... !

"Hello!!!" I shouted, waved my arms above my head and rang my bicycle bell for the first time on the trip.

Yes! I think he or she heard me! I started walking towards the silhouette that now seemed to have changed direction and was now heading towards me. We were getting closer to each other. Hi!! Hello! Am I happy to see you!! :-D

And there, I had met Morekisi, a 17 year old boy living alone out on his family's cattle post, looking after his parents farm while the rest of his family was living in town. This is not at all uncommon in Botswana. In this dry, salty, and seemingly inhospitable area he was taking care of cattle, goats, chickens, and now me. The first thing we did after we got to his compound, his clay and straw hut, was to walk to the borehole with a large empty bucket each. On way there, he showed me a snake he had killed the day before and hung up in a tree – a warning to other snakes! On the way back we had to take breaks carrying the heavy buckets of water, quietly admiring the setting sun. A huge, glowing red ball in-between the trees. I was so happy.

The water made me a little unwell. If you're not used to the salt levels in the water out here that can happen. It was anyway better than no water! And how could I not have a good time cooking on the bonfire, under the stars, talking with Morekisi and listening to local tunes that came from the solar powered radio in the neighbouring clay hut, all in the middle of nowhere. We really connected, Morekisi and I. We both just laughed and smiled around the fire the whole evening. He taught me Tswana. Metsi = Water. Mathata = Problem. We both agreed we liked dancing 'too much'. Both of us just kept on putting more wood on the fire, not wanting to go to bed. 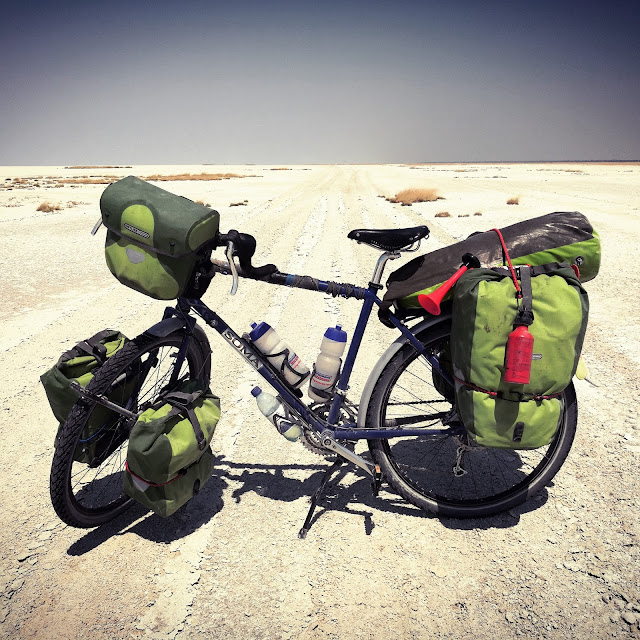 The next day, he took me back to the edge of the pans, showed me the tracks to the veterinary gate, and we said our goodbyes. There, at the beginning of the salt pans, where the vastness that lays before you fills you with awe, respect and excitement. I'll never see him again, but I really hope he will always know how special our meeting was for me. Although I'm cycling alone, this trip is all about the people I meet. And now I'm all teary.
Posted by Stan at 6:36 PM 0 comments 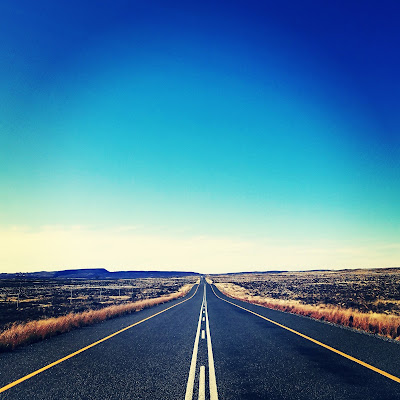 Teresie Hommersand grew up near Stavanger, a city known as the oil capital of Norway. She remembers eating supper every evening off plates with the logo of the national oil and gas company on them. Somehow she became the "green sheep" of the family. She has lived in Uganda, Oregon, and Australia. She currently resides in South Africa. We did not sponsor her the Soma Saga DC she is riding, but will be donating to the charities she is trying to bring awareness to.Learn more about her 13,700 km ride going from South Africa to Norway and her charity crowdfunding campaign on her Facebook page and Instagram. We will be posting some of her experiences here on the blog. She is already in Malawi at the time of this post.

I'm Teresie, a 31 year old Norwegian girl, and I'm cycling solo from South Africa to Norway! From the most southern point on the African continent to the most northern point in Europe!! All on my Soma Saga.
I love people's reactions when they see me. There's no limit to hooting, waving and thumbs up from passing cars and trucks. I've had people clap, blow me kisses, ask for my autograph and even say gravely that I'm going to die. While some propose, others become speechless. But above all, EVERYONE is so interested, excited and enthusiastic! Cycling becomes a dream with all of this support! 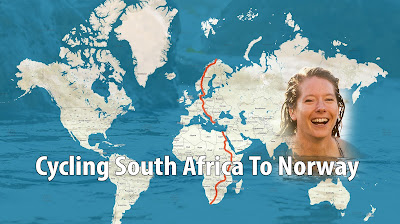 Your mode of transport really influences what you experience along the way, who you meet and how you interact. For instance, one late afternoon as the sun was about to set, I found myself on a dirt road in the Klein Karoo in South Africa. A dry farm country with hills and mountains and great distances between farms. I was getting a bit uneasy. I didn't feel like camping out in minus degrees. I had become an expert at being invited in to random people's homes after a whole day of cycling. However, there were no signs of human activity except for the corrugated and rocky road I was on. I raced the setting sun.

After climbing an uphill, I finally saw a farm gate! It looked decent. Well maintained. Let me try! I cycled down this road, looking for houses. Nothing. I was in the middle of nowhere. Then I saw something that looked like really big cows. I cycled a bit closer. They turned out to be buffalos! Luckily there was a fence between us. I cycled on. A house! Hurray! There were absolutely no one there. I started to mentally prepare myself for a cold night. Then I heard voices. It came from the farmworkers' quarters further ahead. Ok! At least I'll have company! As I cycled towards them I became aware of a group of trees. There was something amongst those threes. A building? Is that a road? Are those cars? I suddenly found myself in the farmer's driveway! A green oasis in the otherwise dry and dusty yet stunning landscape. There was even a braai (barbecue) area and a swimming pool! And there was the farmer, wondering who on earth had pulled up infront of his house on a heavily loaded bicycle. When I asked if I could pitch my tent in their garden, he said 'Are you mad? Come in!'.

As I was shown to my own room, I was informed that all the farmers in the area was also about to arrive for their monthly catch-up! Not only did I get to meet everyone in the whole area, but had I knocked on the door of any other farmer that evening, no one would have been home! I was so welcomed, so included and so full of the heartiest 'afrikaaner delights' that evening.

The next morning, as I was fastening my panniers to my bicycle, Wessel (the farmer) asked me 'Don't you wanna go for a private game drive on the farm?' I was already in cycling mode and had to take five minutes to reboot before saying YES! How often do I have this opportunity? We spent the whole day out together, in the best outdoor classroom, getting up close with and learning about the Impalas, Sable Antelopes, Rooi Hartebeests, Oryx, Ostriches, Elands, Water Buffalos and many more. Wessel knew all about the areas flora and fauna. It's geology. How the drought is affecting the area and the farmers. He and his son Izak even challenged me to a round of bokdrol. A poo spitting competition! Apparently, dry Impala dung is the poo of choice for this game. We only had Kudu poo. I lost.
I was made to feel so at home by the whole family that when they invited me to stay a third day, I almost did. For two months I cycled through South Africa. I only camped twice, and that was my own choice. The rest of the time I was invited into the homes of everyone I asked if I could pitch my tent in their garden. I am sure that a lot of this happened just because I rocked up on a bicycle❤️
Follow the journey on Instagram: teresiehommersand and Facebook: Cape to Kapp 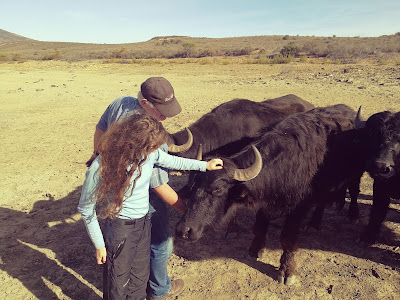 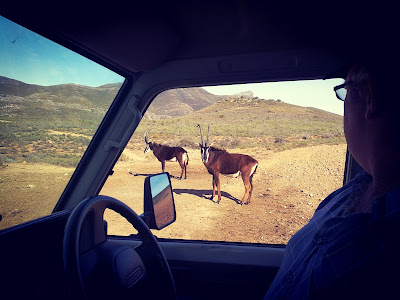