Cape to Kapp: Facing The Pandemic in the Middle of a Solo Tour

About 147 weeks ago, Teresie Hommersand began her solo bike tour from Capetown, South Africa. Her destination is Kapp, Norway (thus Cape to Kapp). Of course with all these types of endeavors, the journey is more important than any destination. Wish her well and learn more about her 13,700 km ride going from South Africa to Norway and her charity crowdfunding campaign on her Facebook page and Instagram.  The last time we posted one of her travel stories she was just leaving Africa by crossing the Suez Canal. Thru 2019 and this year she has gone thru Turkey, Greece, and is in Europe now. This is her account of touring thru Austria and Germany in the midst of nation-mandated security measures to slow the spread of Covid-19.

Unforseen Challenge
Amongst the many challenges I thought I might face cycling solo from South Africa to Norway on my Soma Saga, a pandemic was never one of them. None of us saw this coming, but now it's affecting our lives in various ways and to various degrees.

Uncertainty
I was in Austria when the first regulations intended to prevent the spread of COVID-19 came into force. The plan was to stay a little bit longer in the country, but with all the uncertainty and the possibility that I would not be allowed to cross the border to Germany next, I sped up to avoid getting stuck. As I approached Salzburg, the border city, I got news that the next day the German chancellor was going to give an update on the situation in Germany and possibly implement even stricter rules. I then decided it was best to cross the next day. But how? 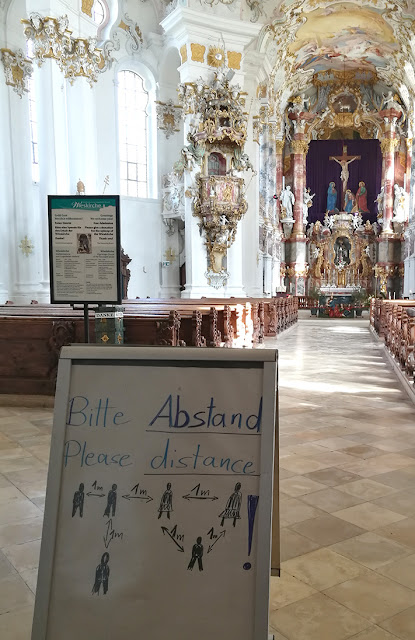 Strategy and Butterflies
All the borders were already being checked by the police, and only goods and commuters were allowed to cross. You were only allowed to travel, if you had a darn good reason. Does what I do fall into that category? I looked into other options. Finding places I could cross that was still not controlled. I found a walking path through a neighborhood. Friends told me about small bicycle bridges across the river that borders Austria and Germany in this area. Others said I could cycle through the forest at night. I just had to make sure I didn't stray into the military area nearby. In the end I decided to cross at a police checkpoint, after I learned that it was illegal and you could risk high fines, if you tried to cross the border in any other way. I had butterflies in my stomach. It would be one thing to be told I couldn't cross, but it would be another thing to be told me I had to get on a plane and fly back home. After all my two and a half year tour across continents was to avoid flying because of climate change.

Border Crossing
I arrived at the border. 'Hi!'. They were nice. 'What you're doing is certainly unusual and a bit tricky to categorize'. 'Is there any ways that you can get on a train?'. 'I'd rather not'. After about 10 minutes of the police trying to understand my situation and them thinking long and hard about if it qualifies as a transit or not, they said it was ok.

I had the biggest smile as I took my first pedal strokes in Germany. Not long after I came past the mentioned bicycle bridges I considered cycling across to avoid the police check point. They were completely blocked and the Austrian army was even patroling this normally sleepy riverbank in their army vehicles. So surreal, and so glad I crossed the border in a legal fashion.

Shut-Down
However, now the real challenge began. With everything closed, I had limited access to water, food was ok, but finding a place to charge my phone was problematic. I've spent a lot of time in churches lately, charging my phone, as this is the only place that's open. Because of the charging situation I've also reduced the usage of my phone to pure navigation and absolute minimal communication with others. Pretty much all toilets are closed which is not a problem in itself if it wasn't for that this part of the world hardly has any wild nature, only wide open farmland or people.

Unlucky
I was hit hard by a cold spell and the illegal camping was made worse because of minus degrees and frost. Wild camping is not allowed in Germany so I had to pack up first thing in the morning so no-one would see me - before my sleeping bag and tent had a chance to dry. You can also forget about breakfast. It's too cold to stand around and eat. Before the coronavirus I used to stay with people, camp in their gardens and have the most amazing time together. Now at night I've been hiding out in bird lookout towers, behind tool sheds, at closed campsites and next to unfinished buildings. The enjoyment is to a large extent gone.

Sadness
I'm cycling through a new country but I'm not learning anything about it. I'm not engaging with people, only observing limited life in public. I didn't have a proper, meaningful conversation or connection with a fellow human being for a whole week. It makes me really sad. I've long ago realized that I could never cycle from South Africa to Norway without truly connecting with people along the way. I might be physically strong, but if I'm not happy, if my heart is not in the right place, I could not manage this.

The importance of people
I've learned this through countless, beautiful and most precious experiences along the 20,000 kilometers I've cycled to date spread out over two and a half years. But now, for the first time, I'm also learning it through not having this anymore. Because of social distancing. I am genuinely and deeply mourning the loss of these beautiful meetings with fellow human beings. When it boils down to it, they are what has kept me going this whole time.

Safe haven and the way forward
Right now I'm so thankful for finally having reached a good friend and to be staying under her loving and caring roof. Going forward, I'm preparing myself for rougher days. For longer periods of only cycling with a few select 'safe havens' (friends) along the way up to Denmark.
I know other people have it way worse than me during these times, but this is how I'm currently experiencing cycling from South Africa to Norway on my Soma Saga.
Posted by Stan at 3:10 PM 27 comments