I Was Running Out of Water 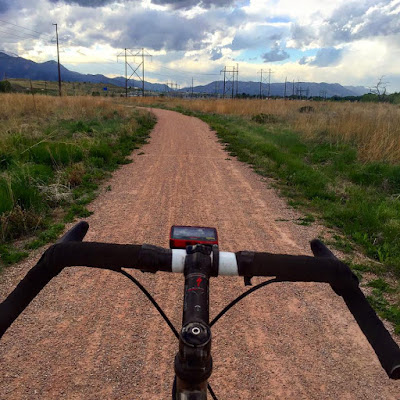 The SOMA FURTHER BOTTLE is the largest bottles designed to fit securely in standard water bottle cages. 38 oz. Over 1.1 liters. Still squeezable like other bike water bottles.
Ideal for bikepackers w/full-suspension bikes that only have a single set of water bottle bosses.  A must-have for those who go on super long rides and don’t like hydration packs.
Here is why Jon Severson requested Soma to take on this little project.

By Jon Severson, founder of Monstercross News and guest contributor to Cyclocross Magazine

It’s been awhile since there has been more than an incremental gain in any bicycle related component outside of a few exceptions. So when I teamed up with Soma Fabrications awhile back, my goal was to see what could we do that would change how people ride or make it more fun? Ideas for new types of frames, tires, and more were flowing, so I went for a ride to sort them out and do a little trail-based thinking.

In a series of rides analyzing terrain and the frame of an existing bike, I kept thinking the bike needed some tweaking to make it perform better for me, but later I discovered one other thing was holding me back on each test ride. It was not the width of my tires or rims and while subtle tweaks to frame geometry or more fork travel would definitely make incremental gains across the terrain, there was something far bigger.

I was running out of water.

With just one bottle cage on the frame, my initial thought was well we’ll just add a 2nd bottle inside the triangle and that’s an easy fix. Yet still, on some frames this would only fit a small bottle and on the smallest sizes, that wouldn’t even be an option.  And for me, throwing a bottle under the down tube only to get covered in who-knows-what and not being able to grab it while riding is a no-go.

Some would say just add a hydration pack, but I dislike riding with something on my back and cleaning those bladders isn’t as easy as tossing a bottle in the dishwasher. Those tiny bite valves can’t deliver water fast enough on a 95-100 degree day here on the Southern Front Range either.

One late evening I had this nagging question, “Why are all bike bottles basically 20/22oz or 24/25oz?” Well, small bottles are easier to use and lighter for races where you have aid stations, support crews, or domestiques. The old argument against bigger bottles was “Well, that’s how it’s always been”. And while a couple half hearted efforts into the 33oz-ish size have been made, they had issues with leaking or too stiff a plastic or both. They were also VERY hard to find on top of it all. So the decision was made, how big could we really go?

So for the last year I analyzed existing bottles, bottle cages, bottle cage materials, looked at non bike bottles, talked with consumers, and begun the design process. I knew the last thing the industry needed was a new standard, so I worked with existing bottle cage standards as the starting point. Next, who’s gonna be using this primarily? Well, it’s a daily driver-type product vs race day first and foremost. Yeah, I have little doubt that you’ll see riders in the lead packs of the Dirty Kanza or SBT GRVL, etc... sporting these bottles on their 140-200 mile journeys. But the guy racing a crit even in Cat 5 isn’t gonna be using this; he’ll be using the quicker to grab small bottles designed for races where seconds matter.  No, this would be the bottles people would be using every day where extending time on the bike matters more than shaving seconds off each lap.

With this purpose in mind, I began looking at how we could get the most volume possible, while still being easy to grab from the cage and use while pedaling. The lower portion of the Further bottle is just ever so slightly bigger than the average bicycle bottle, so we could be sure to fit 98% of the bottle cages that hold bottles by slightly squeezing them. Next, how big around can we go up top? Got to thinking there is no good reason to make the top of the bottle the same diameter as the bottom other than tradition. So, we went as big as we could possibly go without compromising your ability to grip it. This helped to shave a little height, too. Too much height could create fit issues on some bikes.

After all is said and done, the Further 38oz is 170% bigger than a 22oz water bottle and 152% bigger than a 25oz water bottle. In an era where most advancements are saving grams over the last gen or increasing stiffness in a product that was already plenty stiff, I’d say we made a significant gain in an accessory that’s been overlooked for decades.

But what does that really add up to? For me personally at 230lbs, using the Further Bottle over my normal 25oz bottle allows me to add 20 minutes to my normal after work ride. On a long gravel ride, two 25 oz bottles were good for a little over 2 hours – maybe 2.5 hours on a cool day. With two Further 38oz bottles, I can ride 40-45 minute longer without stopping to refill. Smaller riders will get even better results.

So guess you know now why I named this bottle the Further Bottle, because it allows you to ride further. That’s something beginners or pros will appreciate every day. 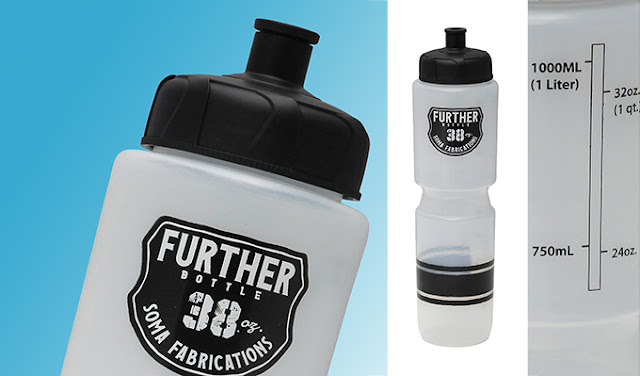