Ben Stuart Evans caught our attention when he sent us some breathtaking photos (shot by his riding partner Jeremy Jensen) of his epic trip riding from Oaxaca, Mexico to Caraz, Peru. They estimated to have ridden 3000 miles and gained a total of 50,000 vertical feet. They did these all on fixed gear bikes – Ben on his 2006 fiery red Soma Rush. He took his Rush [he says 'the Rush took him'] over countless mountain passes, through jungles and deserts, cities and hamlets, past glaciers and erupting volcanoes. They even did a 300-mile sailboat voyage across the Caribbean in hurricane season. What also struck us is that Ben is not just a simple adventure seeker, but has a passion for social work/public health. He was doing community health work in Oaxaca before his trip. On Dec. 4th he left the States to do work in Ecuador.


What kind of work have you been doing the last couple of years? Has it been more work or more exploring this past year?

My work over the past couple years has been a mish-mash of small jobs related to my field of study and totally unrelated work. I graduated in 2009 and immediately left Portland, Oregon for Oaxaca, Mexico where I worked with a couple of non-profit organizations. One of them, Puente a la Salud Comunitaria (Bridge to Community Health), works with families and farmers in rural Oaxaca to reincorporate a native grain, Amaranth, into the diet, agriculture and local markets of the region. My work with Puente, like my work with another organization that focuses on creating a space for children to lead their own community projects, was split between helping with organizational redesign and preparation for field work. I also taught English for a bit. One thing that I loved about each of those jobs was the ever-changing work environment--one day would be an hour-long meeting, the next would be a 16-hour day in the field. Since moving back to the states in December 2010, I've gotten my Wilderness EMT and worked on a fire crew with the Forest Service. [Editor: He is currently spending the winter in Ecuador working with a farming co-operative to identify mechanisms of social marginalization that affect their communities and thinking about how the co-op can start to address those inequities.]


What is more satisfying/rewarding? Social work or riding?

Ay, I don't think I can quantify that one. They sort of feed off of each other. I'm a person who really needs that physical outlet, so I think I'm better able to tap into my creativity for work when I'm riding regularly. The flip side is that I am more motivated to ride when work is tough and I have ideas to process in the saddle. In that sense, work and riding are complementary for me, and mutually rewarding.


How did you train/prepare for long distance riding?

Honestly, my training was pretty sorry and Jeremy didn't train at all. I just tried to be in the saddle for at least 2 hours at a time a two or three days a week and ride really hard with weight for about a month leading up to the trip. We knew that the first few weeks of the tour would whip us into shape better than any training regimen, so we didn't worry about it too much. And frankly, sometimes, a midday mezcal was a bit more enticing than sweating up a mountain pass in the Mexican sun.

What ride/tour mistakes did you make you can tell us about to help aspiring touring cyclists to avoid?

Beware of expensive niche gear! I spent a lot of time and money researching the "best" racks for my handlebar bag and saddlebag, only to toss both of those pricy gadgets into a roadside trashcan when they failed two weeks into the trip. Keep it simple, bombproof and versatile when selecting gear. Use gear that you can replace or fix on the road (i.e.: broken plastic brace, not so fixable), gear that can serve a number of purposes, and then carry at least a couple of the most basic "refacciones" (spare parts; ex.: adjustable metal clamps, heavy weight zip ties, duct tape!) to get you through the most barren stretches of riding on your trip.

Avoid trip and route planning like the plague: I know it's hard not to plan, but seriously, just fly by the seat of your pants. The greatest fun on our tour was giving in to spontaneity 100% and enjoying the flexibility of riding for the journey, rather than the destination. Destinations change. Cranking through the rolling hills of Southern Mexico, Jeremy and I were stoked to be on pace for a 150 mile day and bent on making it happen when someone pulled over to chat with us roadside during a snack break. That someone ended up inviting us to stay the night on his brother's extravagant colonial hacienda just behind us--one of the most memorable events in 10 weeks on the road. We thought of the trip as a holistic adventure, not just a cycling one, and were repeatedly rewarded for that outlook. So take a load off, and forget the plan--the unforeseen will probably be far more spectacular than anything you can devise.

Why did you choose to ride fixed? Just riding a geared bike would've been challenging enough.

We rode fixed out of necessity and love... which I realize sounds super cheesy, but it's fitting, really. Have a conversation in confidence with anyone who rides fixed and they'll explain to you the romance in it. It's just a special way of riding. We both had fixed gear bikes and no money to build anything different, but we had this amazing trip idea; it was going to happen. And we did it because we love riding fixed, it's simply an incredible feeling. The bike becomes a part of you. I'll be watching a sci-fi movie and people are jumping into futuristic robotic suits and using crazy mechanical body extension tools and such, and I always think, "Yeah, I already know what that's like." Jeremy had rode fixed from Bend, Oregon to San Diego the summer before, so when I asked him if he wanted to ride to Peru with me, we were both pretty decided on doing it fixed from the outset. The simplicity of it is so appealing on a long, remote tour. There's so little to break on the bike, and we matched our gear ratios so that we could sync pace and draft. And we never worried that we were in the wrong gear. It was the only gear! [Editor: Though he loves riding fixed, he did share that there are difficulties and unique challenges with touring on essentially a track bike, like carrying enough food/water or not having the comfort of fatter tires when riding gravel roads. Mr. Evan's views expressed in this interview are his own and are not necessarily those of Soma.]
Posted by Stan at 3:18 PM 11 comments

Our main distributor Merry Sales has all sizes in stock. They will be shipping backorders this week to shops and other distributors. Thanks for everyone's patience.
The San Marcos is our sport touring frame set featuring Rivendell lugs and designed by the man behind Rivendell Bicycle Works, Grant Petersen. 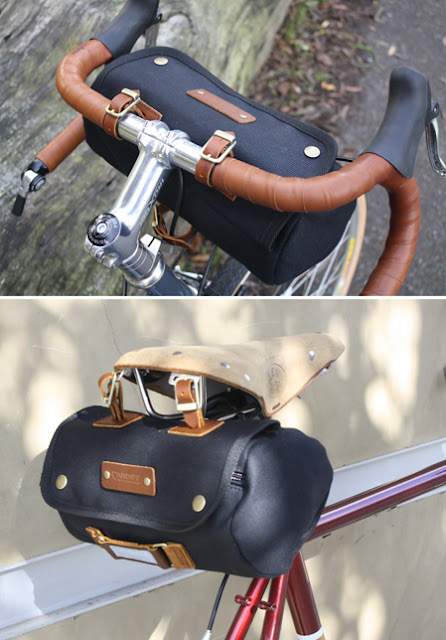 New to the Soma Shop. Cardiff Ltd. is now doing bags. The Killgetty Roll Bag can be used as a bar bag or a seatbag. And will look great on a Soma frame. Heavy weight water-resistant cotton canvas with leather accents.

Also newly available just in time to stuff a stocking or two is this MKS t-shirt that collects 10 of its more interesting pedals they've made over the years. Can you ID them all? In heather gray or black standard fit t-shirts.
Posted by Stan at 11:50 AM 5 comments


Eleanor Moseman and her Soma Saga made their way into the city of Urumqi this week -- in Xinjiang Province in Western China.
And she shared this video on her Facebook page. (Gets more interesting at the 50s mark)
The place is generally very arid so I am surprised to see all the snow. You may remember this is the place with all the riots a couple years back between the native Uighurs and the Chinese. Xinjiang is also where they filmed The Kite Runner, though that was in a different city. "After 10,000 miles toured and 3 years lived in China, Urumqi gets my vote for the best city with night markets and street food."

A big thank you to all to submitted entries. You all will receive one our 10th Anniversary Posters. We must also thank those who helped vote for our winners. We enjoyed seeing all the awesome photos and the interesting bike builds. 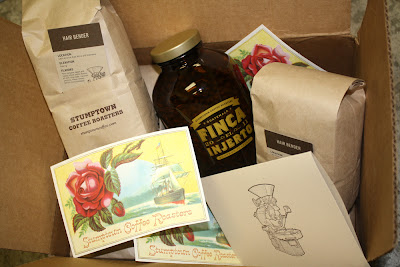 Thank you Stumptown Coffee Roasters for the thoughtful anniversary gift!!! They sent us some of their Hair Bender, which brings together coffees from three major producing regions (Indonesia, Latin America and East Africa) to provide the individual components of this complex sweet and savory blend which yields flavors of milk chocolate, caramel, jasmine, meyer lemon, apricot and pineapple. Sound great even though I don't know what a meyer lemon is. They also sent a jar of Finca El Injerto (from Guatemala).